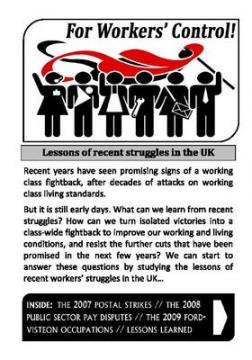 But it is still early days. What can we learn from recent struggles? How can we turn isolated victories into a class-wide fightback to improve our working and living conditions, and resist the further cuts that have been promised in the next few years? We can start to answer these questions by studying the lessons of recent workers’ struggles in the UK…

Postal workers went on national strike in July 2007 over 40,000 threatened job cuts and attacks on pay and pensions.

The strikes got off to a good start in July, rolling strikes and a work to rule caused a massive backlog, then later sparking wildcat strikes across Scotland and the North of England. As the second wave of official strikes was due to start, they were called off by the Communication Workers Union (CWU) leadership, entering ‘meaningful negotiations’ with Royal Mail management.

These ‘meaningful negotiations’ lasted for weeks, came to no firm conclusion (except that measures would be forced through at a local level where it’s easier to divide the workforce), and prepared the stage for a fresh assault on pensions the following year.

Striking posties in Liverpool who had continued with unofficial action were left out on a limb – spending many days without pay as the CWU refused to release details of deals done for fear of a massive negative reaction from elsewhere – with the workforce in most places demobilised by a slow and agonising wait.

In the end, bosses got what they wanted – demoralised and demobilised posties voted to accept an agreement that was basically unchanged from the offer that provoked the strikes in the first place! The CWU declared ‘victory’ – they were guaranteed a ‘consultation’ role in the cuts. But this victory for the union was no victory for postal workers. One postie commented:

“This deal is a total stitch up. During the strike we had them by the balls, then all of a sudden this little agreement was reached. We could have won so much more, given the amount of support we had throughout the country.”

The 2008 public sector pay disputes2
With cost-of-living inflation running at between 5% and 10% and the government seeking to impose a 2% pay ceiling, 2008 saw workers across the public sector balloting for strike action. Despite much talk of common, unified action, workers organised in different unions were divided up into lots of separate, easily defeated units and taken on one by one. In some areas, where workers weren’t so organised, workers were encouraged to accept pay cuts by the unions, like UNISON in the health service.

After that, the next biggest group of workers in local government were demobilised with the union clearly attempting to scare people off taking action. When UNISON eventually realised that they would have to call a strike to save face in the eyes of their angry members, they organised just one stoppage, of two days, with no dates for future action set. After initial actions, workers were left for months while “talks” went on behind closed doors between the unions and the employers, with no pressure actually being exerted on the employers by dates for future walkouts. By the time that the employers inevitably refused to improve their offer, workers had been demoralised by months of inaction. School workers, who amongst the lowest paid council staff were on their holiday during the union consultation.

Apart from those, some of the larger, more militant sectors such as teachers and the civil service were left completely isolated, and the government largely succeeded in imposing across the board pay-cuts. It’s noteworthy that the workers who did manage to win decent pay rises – such as the Shell truckers, who won 14% over two years – were those willing to take militant, sustained direct action and spread the struggle beyond their immediate workplaces.

In March 2009 Visteon – a company making parts for and majority owned by the Ford Motor Company – announced the closure of three factories in the UK and the sacking of 610 workers without redundancy pay. Workers were given only minutes notice of the decision.

This triggered workers at the Belfast factory to occupy their plant, demanding proper compensation. Their action was emulated the next day by workers at the other two UK plants, in Enfield and Basildon. The workers held the plants – and held the power, preventing administrators from selling off the company assets.

Workers at all plants were members of the Unite union. From the start at Enfield, Unite’s only contact point and involvement was via the factory’s convenors. Some union bosses came down briefly to pledge support, but actually delivered nothing, apart from poor legal advice – telling the workers what they were doing was illegal (it wasn’t). The occupiers were left to sustain themselves – despite workers paying years of union subs, no money was given (after 3 weeks or so, it is rumoured that the union finally provided a little finance). The union gave no mention on its website of the dispute, nor encouraged their members to give active support.

Eventually, an offer was negotiated by union and company bosses – behind closed doors. The first offer was simply the legal minimum. The threat of solidarity strikes brought bosses back to the table with a slightly improved offer. Prior to voting, Enfield workers had the details of the deal read out to them by convenors, and some saw a handwritten version of its points – but workers were not provided with copies of the agreement they were supposed to be deciding on.

The vote on the deal was deliberately arranged by the union so that Enfield and Basildon voted on it on the Friday, then Belfast, still in occupation and with a more militant reputation, would vote on the Sunday. So, inevitably, the acceptance of the deal at Enfield and Basildon was designed to encourage acceptance at the Belfast vote. All plants did vote acceptance; the Enfield vote was 178 to 5 and Basildon was 159 to 0. Belfast voted 147 to 34. While the workers won small concessions, Unite’s role throughout was to urge an end to the occupations – the very source of the workers’ bargaining power – since they were organised and controlled by the workers themselves. Once Unite regained control, they recommended acceptance of a partial offer that left the crucial issue of pensions untouched.

The examples in this leaflet show the contradictions and limits of a rank-and-file level of trade unionism. It is not simply a matter of the unions ‘not doing their job properly’ – they do it only too well, since they need to be able to control workers’ struggles in order to function as representatives of those struggles.

Shop steward and convenor positions – often taken by the most militant workers – must mediate between shop floor interests and the union bureaucracy’s organisational interests. Workers often see the union as an organisational framework giving them a collective identity and protective strength; and on a day to day level it often does so, within existing conditions and agreements.

What workers don’t always acknowledge (or fail to act upon) is that this strength is their own power mediated – and therefore limited – by the union structure as its representation; a power that has the potential to conflict with and go beyond both the control of their employers and their union leaders.

In place of the representation of workers in the trade unions, what is needed is self-organisation by workers exercising their collective power directly. How can this be done? Fortunately, many millions of workers have faced these problems before, and out of their trial and error some forms of organisation have repeatedly proved the most successful.

The central form of self-organisation is the mass meeting. However, it is vital that mass meetings do not just give a democratic rubber-stamp to decisions made elsewhere (as happened in the Ford-Visteon dispute), but take an active role in organising and controlling the struggle. Workers should demand whatever information they need to make informed decisions from management or union officials, and develop a culture of discussion to ensure all workers, even those with less experience or confidence can play an active part in the struggle.

Many workplaces have several recognised unions. Workers should open up their meetings to members of other unions as well as non-union workers – who should not be assumed to be scabs since they have the same interests as their workmates. Management and scabs should be excluded from workers’ mass meetings, but workers should consider letting supporters attend without voting rights at their discretion.

Not everything can be done in a mass meeting. Sometimes a strike committee is needed to draw up demands. Other times workers may want to produce a leaflet or do some research. They may also want to send delegations to other workplaces in order to encourage solidarity actions and spread the struggle. These kind of things cannot practically be done by mass meetings of tens or hundreds of workers; delegation is needed.

The important thing when electing delegates is that the mass meeting retains overall control. Even members of the strike committee are not there to lead the rest of the strikers, but to implement their will. This means delegates should be mandated, given a specifically defined task or tasks to carry out. Delegates can then be recalled and replaced by the mass meetings if they fail to carry out or overstep their mandates.

In the heat of a dispute many a solid shop steward or convenor has been forced to choose between the interests of his workmates and those of his union bosses. This highlights the need for militant workers to organise independently of the trade unions as well as inside them. Such networks of militants can help provide the moral support to do the right thing, as well as advice, practical support and a continuity of experience between the ebb and flow of struggles. They can also link militants in different workplaces, industries and places, creating the potential to spread struggles that terrifies bosses and wins disputes. Such networks are not there to represent workers, but should agitate and organise for self-organisation: mass meetings and the use of delegates.

However as they grow, such networks can take on some of the useful functions of trade unions (such as legal advice, co-ordination with other workplaces etc) without the problems of representation (a bureaucracy that needs to control workers struggles in order to persuade bosses they are ‘responsible’ negotiating partners). Current examples of networks of militants in the UK are the National Shop Stewards Network (www.shopstewards.net), made up of elected workplace reps from all unions, and the Solidarity Federation (www.solfed.org.uk), made up of workers committed to the principles of solidarity, direct action, self-organisation and a world without bosses!

The ideas set out in this leaflet are known as ‘anarcho-syndicalism’ – a practice of militant workers organising that goes beyond both the institutional and legal limits of trade unionism. See www.brightonsolfed.org.uk or email brightonsolfed@googlemail.com for more information, other leaflets and pamphlets or to get involved!

Direct action gets the goods!

This leaflet is all about workers learning from others’ struggles, and organising themselves without relying on anyone else – whether union leaders or politicians.

Workers are at their strongest when they take collective direct action to assert their needs against the bosses, acting in solidarity with one another and favouring self-organisation over representation by trade union officials. These principles both get results, whether applied to strikes, pickets, work-to-rules, occupations, go-slows or any of the other varied kinds of direct action available to workers in struggle.

Parts of this leaflet are based on:

This article was published on 27 September 2009 by the SolFed group in Brighton. Other recent articles: