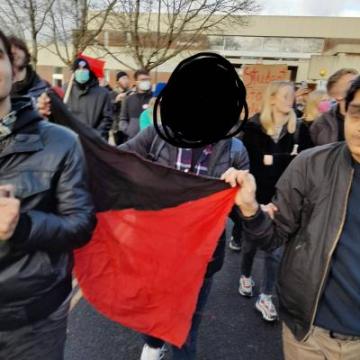 Starting on Wednesday 1st December, 58 branches of UCU (University and College Union) went on strike for 3 days over issues surrounding pensions, pay, working conditions and pay gaps. A group of SolFed members who are students at Sussex University attended the picket line and took part in direct action in support of all staff who were on strike.

The strike began with a big demonstration and march around the campus, ending at Sussex House - the university’s management building. We attended and waved our red and black flag, asserting an anarcho-syndicalist presence among the students.

One member attended a march organised jointly by the Brighton and Sussex UCU branches on Thursday the 2nd. This began at the University of Brighton campus in Moulsecoomb, wound its way through the city centre and culminated in a rally at the Level, with speeches from various union officials and student activists. While it was on some level encouraging to see the significant number of students and staff showing solidarity with one another, it was difficult to tell what else this demo was meant to achieve beyond just doing yet another safe, police-authorised A-B march out of a sense of obligation. While more than one speaker at the rally rightfully expressed concern about the government’s attempt to crack down on more disruptive forms of peaceful protest with the Police, Crime, Sentencing and Courts Bill currently in Parliament, it was hard to see exactly how a demo of this kind would be jeopardised by the proposed new restrictions.

By contrast, on the last day of the strike a group of students blockaded Sussex House, creating a strong picket line and forcing university management to find another place to work for the day. The student’s direct action was effective in shoving the dispute right in their faces. As anarcho-syndicalists, we believe it’s immensely important to show solidarity with striking workers wherever we can. As students at Sussex, we are really feeling the impact of the increased casualisation of staff  and privatisation of the university. Our lecturers are overworked and burnt out, our classes are getting bigger and bigger. We have seen the gentrification of accommodation and been directly affected by the lies told to us by management throughout the pandemic.

Earlier this year, Sussex UCU supported students by putting out a statement against the university’s institutional transphobia. Many students attending the picket line voiced this as one reason they want to support the union as staff had shown them solidarity earlier this year. Despite the university management’s attempts to divide the students and workers, we have seen first hand that they are not interested in helping either. We are fighting the same battles and we need to support each other where we can. With another round of strike action planned for February, we hope to see the student movement stronger than ever and organising effectively in solidarity with the workers on strike.

This article was published on 29 January 2022 by the SolFed group in Brighton. Other recent articles: