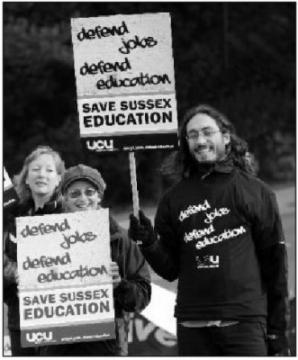 The other unions at Sussex, Unite and Unison, representing support staff such as porters, cleaners, IT and workshop technicians, did not even enter in dispute with the University. But like UCU, both Unite and Unison aimed at reducing compulsory redundancies and improving voluntary redundancy packages.

Whilst committee members continued the consultation process, some of the rank and file members argued that the starting point of the unions was wrong, and they should be opposing cuts altogether. None of the three campus unions had rejected university bosses’ line that savings needed to come from staff costs - despite ongoing multi-million pound building projects, and the Vice-Chancellor behind the cuts granting himself a 43% pay increase to £227,000 a year.

“Our area rep came to a special Unite meeting, arguing to give them two more weeks consultation with management,” said Tony, a Unite member and IT worker. “If there was no significant movement during this time, the area rep said she would bring the ballot papers to the next meeting. It shouldn’t be too much of a surprise that she didn’t even turn up to the next meeting, let alone bring ballot papers!”

Frustrated with their union’s unwillingness to fight, a group of workers set up the Support Staff Forum (SSF), involving workers from all three campus unions, non-unionised workers as well as several students. Paul, a worker involved in the group, said “one of the good things we have been doing is making both us in the SSF and the wider campus community aware of the cuts and changes in working conditions in the different sectors, as although we all work on the same campus each department can be quite insular.” The SSF also had some success in building solidarity among education workers, such as by encouraging non-UCU members to honour UCU picket lines.

Despite several strike days, widespread support and solidarity, and a vibrant student campaign leading to a week-long occupation in which many hundreds of students and education workers took part, the UCU’s suspension of industrial action marks the end of the dispute. As one would-be striker commented, “Though UCU exec worked tirelessly to achieve the best outcome possible, I feel that once they accepted the need for cuts, they could only negotiate a defeat. Higher Education bosses are using the budget crisis to push through long-term restructuring that will destroy education as we know it. So instead of focusing only on compulsory redundancies, we should have stopped them wrecking our university by opposing all staff reduction. However it looks like UCU nationally are more interested in being involved in restructuring than in stopping it.”

UCU held a ballot for an academic boycott against Sussex, demanding an Avoidance of Redundancy committee which Sussex bosses had rejected out of hand. Earlier in the year at Leeds University UCU had called off industrial action against 700 redundancies after reaching a “groundbreaking” settlement that included setting up an all-union redundancy avoidance committee and postponing any compulsory redundancies until completion of a review in January 2011. However, it later emerged that 400 staff had volunteered for redundancy. With large cuts to higher education budgets, UCU estimates that 22,500 redundancies are in the pipeline in higher education, on top of 34,000 job losses in further education.