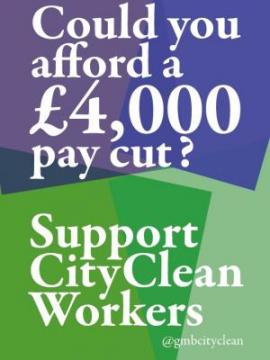 Bin men in Brighton today voted overwhelmingly to strike over attempts by the Green led council to slash pay.

The bin men (a self-adopted title, although they include many non male workers) voted 96% in favour of strike action. This follows an unofficial walkout on the 8th and 9th May and a fiercely enforced work to rule since which has left rubbish piled up across Brighton and streets unswept.

The first strike action is due to start on the 14th June and to last for a week. Further action is likely to follow if the council does not ditch the proposed pay cuts.

Brighton and Hove City Council is attempting to cut allowances and other payments for workers in the 'CityClean' department which make up a large proportion of the striking workers’ wages. Bin men in the city are estimated to lose £4,000 each as a result, with some longer serving workers losing even more.

Green Council leader Jason Kitcat, who has led the attempts to slash pay, has suggested the bin men ‘don’t understand’ the changes. He has claimed that the intention is to pay a ‘fair wage’ rather than to cut pay. Other Green councillors have sought to hide behind unelected officials who have been given powers to implement the cuts in order to escape blame.

Revealingly, the council appears to be plotting to use scab labour during the strike, with bin lorries spotted secretly parked at an alternative depot. Kitcat currently insists that the location of the lorries is 'just parking logistics' and that there is 'no secret plan'.

The arrogant stance taken by the council has unsurprisingly provoked an angry response from the bin men,  who marched on the town hall and heckled Kitcat on the second day of the wildcat strike. One worker quoted in an article in Ceasefire magazine branded the Green council ‘fucking tories on bikes.’

Since 2001 Brighton bin men have gained a reputation for being some of the most militant in the country, building up relations of workplace solidarity and showing a willingness to take action, including wildcat strikes and the 'downing of tools', in order to defend their pay and conditions. This has forced the GMB hierarchy to follow the lead of the workforce rather than attempt to dictate orders from above. The last strike in 2009 saw the then Tory led council cave in on demands for £8,000 a year pay cuts on the first day of the strike.

Brighton SolFed has been involved in a campaign of solidarity and support by people across Brighton, which has included messages of support being stuck to bins and stickers being stuck to lamposts and traffic lights across the city.

Further information and updates on the campaign can be found on the CityClean workers’ twitter page @gmbcityclean.

This article was published on 7 June 2013 by the SolFed group in Brighton. Other recent articles: