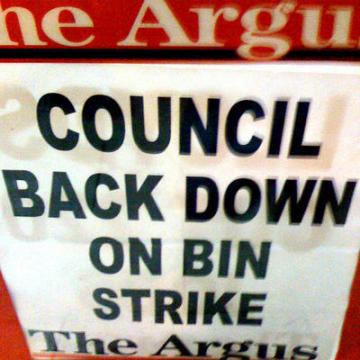 Having gone on strike initially in defiance of their national unions, the strikers (who made their decisions at mass meetings) succeeded in forcing management to negotiate (despite council leader Brett originally saying that he would not), and ultimately defeated the plans to slash their wages.

The deal however involves “efficiency and productivity improvements” (new shift patterns, reorganisation of rounds, and an increase in the number of bins collected per hour). The exact number of bins per hour was still to be agreed when the deal was accepted, but will be between 196 (the old figure) and 220 (an impossible figure proposed by the council in an overwhelmingly rejected “final offer” made in week six of the strike). The average figure in neighbouring local authority areas is 181.

Local government refuse workers in Bradford and Sheffield agreed deals shortly after the strike was settled, averting expected strikes in those cities. In Bradford the evolving deal appears to involve regrading jobs in order to scrap bonuses, with some workers expected to gain and some to lose.

Meanwhile, in Brighton workers  needed just two days of solid strike action to bring the council tumbling down. Despite all of their sabre rattling throughout the summer, the council was ill-prepared for the resolve of the workers, and how solid their action would be, or for the level of support the Cityclean workers would command.

Both of these victories demonstrate that the only way to defeat the cuts being forced upon us is by standing together and fighting for our needs.  When action is solid, even the most obstinate of employers can be quickly forced into a retreat.