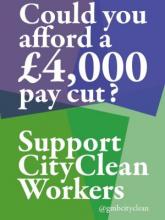 Bin men in Brighton today voted overwhelmingly to strike over attempts by the Green led council to slash pay.

The bin men (a self-adopted title, although they include many non male workers) voted 96% in favour of strike action. This follows an unofficial walkout on the 8th and 9th May and a fiercely enforced work to rule since which has left rubbish piled up across Brighton and streets unswept.

The first strike action is due to start on the 14th June and to last for a week. Further action is likely to follow if the council does not ditch the proposed pay cuts. 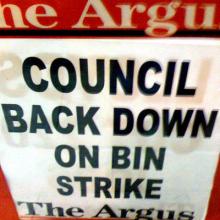