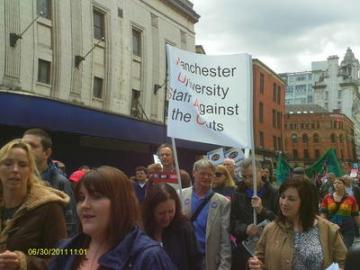 In the lead up to the 30th June strike the group focused more on goings on at the university. It produced leaflets in support of the strike and a reasonable motion was put together with the aim of it being passed by all the union branches. In the end it only got passed by the Unite branch. In the case of Unison this is largely due to their total lack of any semblance of internal democracy. It is worth mentioning that, for its size, the Unite branch meetings are well attended with 50 turning up. Attempts were made to water the motion down by the Unite branch exec but these were overturned from the floor.

Through the weekly stalls an increasing number of names have been collected for the anti-cuts email circulars. Of these, there’s a surprising number of non union members, a clear indication of just how badly the existing campus unions are faring. They are failing to pick up or connect with people who are clearly against and angry about the cuts.

On the day of the strike there was no visible presence on the march of the University of Manchester unions, even though the march started very close to the university. The only UoM banner was the small MUSAC one pictured (courtesy of Pinkolady on Indymedia). Speaking to a UCU member involved in MUSAC, it appears that the UCU branch had “played down” the dispute. This is surprising given that the UCU were on strike only a few weeks earlier and that there is a well organised, SWP-dominated “UCU Left” within the branch. But what is more puzzling is that we met several UCU members who were on strike from the nearby Manchester Metropolitan University (MMU). Needless to say the Unison branch at UoM remained silent, no doubt waiting for orders from above to join the barricades.

MUSAC is the only group, apart from the EWN, arguing for cross-union workplace unity. It is an, as yet small, example of how SF industrial networks can participate within rank & file groups while retaining their revolutionary perspective.

As EWN members, we continued with our own activities. The 30th June posters and stickers were put up round both Manchester universities. We also had an EWN stall at MMU just prior to the strike. We had the posters along the front of the table, drawing people’s attention to the stall, and we distributed the EWN leaflet that went down well, even leading to us getting a couple of donations. We followed this up by again distributing the leaflet on the demo, along with all of our copies of Catalyst.

This article was published on 3 July 2011 by the SolFed group in Manchester. Other recent articles: