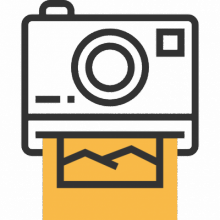 At Easter, Liverpool-SolFed made a call out to protest against working conditions at Sandemans, a company who offers “Free Tours” in Liverpool and across Europe. “Free Tour” does not mean that guides are volunteers. In Sandeman’s case they are ‘self-employed workers’ and their incomes are based on the tips that are given at the end of the tour and out of those tips workers have to pay a variable amount of money per tourist to the company. This is, according to Sandemans, a “marketing fee”. 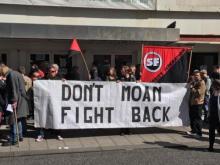 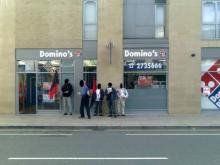 Manchester Solidarity Federation, aided and abetted by comrades from West Yorkshire Solidarity Federation as well as Anarchist Federation and other libertarian comrades from the Manchester area, picketed a Domino’s branch in the university area of the city on Saturday September 15th.
This was part of the international day of action called by the General Transport Workers Association whose members, pizza delivery drivers in Brisbane Australia, have had their wages slashed by 19%
On the day, our presence and the information leaflet we were handing out soon got up the nose of the manager who arrogantly thought he could order us off the public pavement outside the premises. No such joy for him, and after a brief argument, we told him in no uncertain terms that if he was so upset by us standing there he should call the cops. He did. 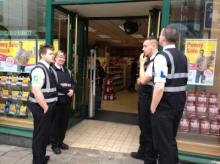 On Saturday 12th May the Solidarity Federation with help from members of Brighton Benefits Campaign held a third picket outside Holland and Barrett’s main North Street store.

We experienced the usual response from the public with about a fifty-fifty split between those continuing to shop there and those who respected the boycott.  Some potential customers who went into the shop came out after reading the leaflet to say they had changed their minds.  Many passers by offered encouragement to the picketers and others were shocked to discover that an ‘ethical business’ would use unpaid labour. 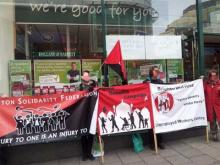 On Saturday members of Brighton SolFed and Brighton Benefits Campaign picketed the North Street branch of Holland & Barrett. This was the second action in an on-going national campaign against the retailer’s continued use of unpaid workfare placements to reduce staff costs. The picket successfully turned away a large number of potential customers and we engaged many members of the public in discussion of the issues, the majority of whom were sympathetic to our message. 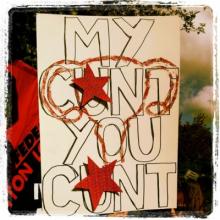 On Monday April 2nd members of London SF, Solent SF and the IWW joined Boycott Workfare activists to picket the headquarters of the Communication Workers Union over their support for workfare.

CWU officials have signed an agreement with the Royal Mail to allow DWP "Work Experience". People on the scheme face the threat of sanctions for refusal and if they do not take part they are likely to be sent on a number of other compulsory schemes.

The CWU leadership insists that their agreement with Royal Mail is for "voluntary" work experience only. Unless there is a guarantee that people leaving the scheme will not face sanctions the scheme is not voluntary. No such guarantee is in place. 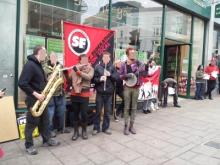 On Saturday Brighton SolFed held three separate pickets of Holland and Barratt stores in Brighton and in Hastings in response to their continued use of unpaid workfare placements to reduce staff costs. Across the country SolFed locals and other groups took part in a day of action to highlight the use of workfare by high street companies.

The national day of action was called by SolFed to coincide with the International Workers’ Association (of which SolFed is the British section) days of action which included the general strike in Spain called by our Spanish section, the CNT.