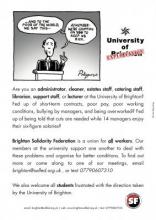 Working conditions in educational institutions are becoming more and more difficult. This is often linked to managers making cuts, establishing austerity measures, or asking all workers to do more for less.  We currently organise as a network of workers at University of Brighton, and have links to other educational institutions.

We aim to organise to improve these conditions on a day-to-day basis, trying to fight winnable disputes for caretakers, cleaners and hourly-paid lecturers alike. To resist the ways that these institutions are attacking the working conditions of all staff means working together, not establishing boundaries between academic and non-academic staff.

Five years ago, “zero hours” contracts came to the attention of the national media. While there is no one type of “zero hours” contract,  in all cases workers receive no guaranteed weekly hours or income. Workers are paid only for the actual hours worked, and the employer is under no obligation to provide any work. Their use by employers in very many sectors of the British economy has mushroomed in recent years. In 2006, possibly 0.5% of the workforce had “zero hours” contracts (130,000). According to the Labour Force Survey, 901,000 people (representing 2.8% of all workers) were on contracts that do not guarantee work in December 2017.

South London Solidarity Federation would like to express solidarity with members of the Mexican Coordinadora Nacional de Trabajadores de la Educacion teaching union, who have faced violent attack by the police and state.

The union, which is made up of teachers from the poorer southern states, is protesting new mandated teacher evaluations. These it describes as ignoring the challenges of providing education in rural and underfunded areas whilst also enabling mass teacher layoffs. This is part of a wider programme of privatisation across Mexican education, removing the limited educational provision available to the poorest.

The response from the state has been brutal and violent. Police in Oaxaca opened fire on a teacher protest, killing eight. Two of the unions officials have also been arrested as part of the response.

The University of Brighton wants to close its campus in Hastings. The closure of the campus would likely mean job losses, and it would be damaging to the town, and to access to Higher Education in the town and surrounding area. Brighton Solidarity Federation will be supporting the demonstration against the closure of the campus this Wednesday 13th April, meeting at the Level at 1pm.

On Friday 18th March, members of Solfed informed parents of Dartford Primary Academy, part of the Leigh Academies Trust, about the ongoing campaign to get Lydia’s wages back. Lydia worked for Kinder Sports, who are contracted by Leigh Academies Trust to provide Physical Education lessons and after school sports coaching. Lydia worked for Kinder Sports for 30 hours between 6th and 30th of October 2015 (including at Dartford Primary Academy) however she has not been paid for this work. We are supporting Lydia in demanding Kinder Sports pay her the full £360 she is owed. 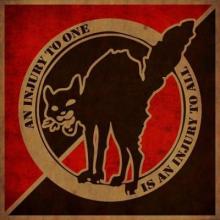 During a September Saturday Brighton SolFed held a network and skills day covering; the immigration act and healthcare, the attack on benefits, fighting wage theft and anarchists on austerity. This full day, including a mighty lunch prepared by members, maintained a constant level of debate and information, concluding in practical action points to continue agitating around Brighton and beyond. 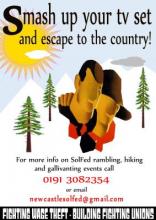 Newcastle SolFed are planning regular trips into the country. For those new or used to hiking, rambling or just casually strolling well away from the hustle of the cities and towns, this is a great way to meet members of Newcastle SolFed in a relaxed and friendly atmosphere. Not all of us are outdoors types - some of us will have to be dragged kicking and screaming - so there are no pressures if you are a novice or unfit. People with any concerns regarding access or mobility should first contact us for further details.

We won't be advertising all of these events, and so are asking those interested to keep in touch, either by email or by phone - or better still by joining our email list.