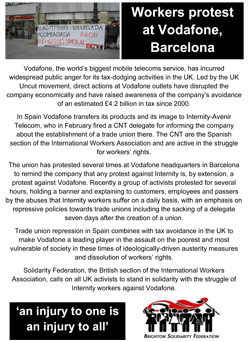 Also available as a pdf file.

Vodafone, the world’s biggest mobile telecoms service, has incurred widespread public anger for its tax-dodging activities in the UK. Led by the UK Uncut movement, direct actions at Vodafone outlets have disrupted the company economically and have raised awareness of the company’s avoidance of an estimated £4.2 billion in tax since 2000.

In Spain Vodafone transfers its products and its image to Internity-Avenir Telecom, who in February fired a CNT delegate for informing the company about the establishment of a trade union there. The CNT are the Spanish section of the International Workers Association and are active in the struggle for workers’ rights.

The union has protested several times at Vodafone headquarters in Barcelona to remind the company that any protest against Internity is, by extension, a protest against Vodafone. Recently a group of activists protested for several hours, holding a banner and explaining to customers, employees and passers by the abuses that Internity workers suffer on a daily basis, with an emphasis on repressive policies towards trade unions including the sacking of a delegate seven days after the creation of a union.

Trade union repression in Spain combines with tax avoidance in the UK to make Vodafone a leading player in the assault on the poorest and most vulnerable of society in these times of ideologically-driven austerity measures and dissolution of workers’ rights. Solidarity Federation, the British section of the International Workers Association, calls on all UK activists to stand in solidarity with the struggle of Internity workers against Vodafone.

This article was published on 2 May 2011 by the SolFed group in Brighton. Other recent articles: