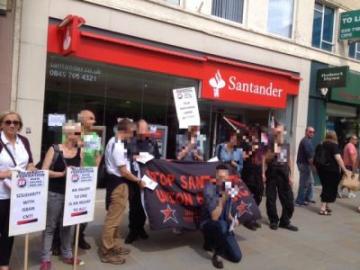 A fourth International Day of Action saw Westcountry members of the Solidarity Federation take to the streets of Bristol, Dorchester and Swindon in support of a Spanish worker sacked for organising a union branch in his workplace. The worker, a member of the anarcho-syndicalist CNT union was fired during a campaign by his colleagues for decent contracts and against illegal outsourcing by ISBAN, a subsidiary of Santander. Solidarity actions took place in 13 countries around the world.

Our Saturday 7th pickets saw 3 actions, one in Bristol, one in Swindon and one in Dorchester, in which over 1000 leaflets were distributed to supportive Santander staff and members of the public, as well as the front of Swindon Santander getting littered with stickers and posters demanding an end to union busting. The actions felt successful, and SolFed members and supporters in the South-West are ready to take further action until ISBAN/Santander reinstate the sacked organiser, and all staff receive decent, direct contracts.

Santander are famous for using overpaid sporting stars to promote their bank with a 1.2.3.

This article was published on 9 June 2014 by the SolFed group in Bristol. Other recent articles: