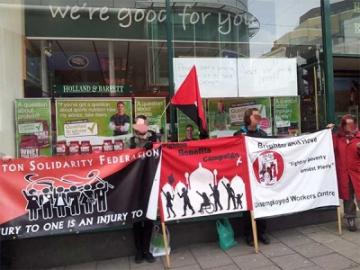 On Saturday members of Brighton SolFed and Brighton Benefits Campaign picketed the North Street branch of Holland & Barrett. This was the second action in an on-going national campaign against the retailer’s continued use of unpaid workfare placements to reduce staff costs. The picket successfully turned away a large number of potential customers and we engaged many members of the public in discussion of the issues, the majority of whom were sympathetic to our message.

One passer-by, who was put on a workfare placement at a London branch of Holland & Barrett, told us that his Jobcentre Plus advisor made no reference to the fact that he could withdraw from the scheme within 7 days of the interview. He was also expected to work overtime at the branch, which left him no time to carry out the job searches required of him. After complaining about this he was taken off the scheme having only completed three weeks of the eight week placement, which goes to show that Jobcentres are taking an uncoordinated approach to the scheme.

We also talked to one passer-by who expressed the view – unfortunately not uncommon – that people should be required to work for their benefits. We reject this idea which attacks even the basic principle that under capitalism workers are entitled to a wage in return for their labour; this sets a dangerous precedent for eroding even further the living conditions of working class people.

Half way into the picket the store manager placed hastily written signs in the window saying that the store was open for business as usual and proclaiming that the staff worked there voluntarily and were not forced into it. This ignores the fact that for businesses workfare is about cutting costs and undermining the conditions and job-security of their existing staff; Holland and Barrett intend to take over 1000 workfare staff this year, a number equal to more than quarter of their workforce. The fact that he felt compelled to display these signs testifies to the effectiveness and growing momentum of the campaign, we responded by raising banners and flags in a show of solidarity.

SolFed and other groups across the country intend to keep up the pressure on Holland and Barrett and other companies who are taking advantage of workfare, to expose their attempts to undermine the conditions of workers and their role worsening the pressures of unemployment. The campaign will only stop when the company publicly withdraws from the scheme.

In addition to pickets we’re also calling on people to join us in expressing their demand for an end to workfare to Holland and Barrett directly by taking part in a phone and email blockade of their head office and HR department. …details to follow

This article was published on 16 April 2012 by the SolFed group in Brighton. Other recent articles: