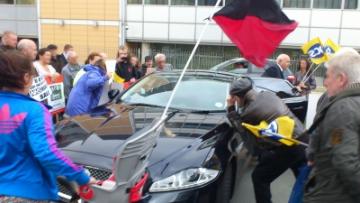 Today (Friday 29 June), Iain Duncan Smith went to Bootle in what was planned as a low-key visit to Department for Work and Pensions offices. Instead it was the scene of a lively picket where local anarchists joined trade unionists from the area to oppose the capinet minister's arrival.

Obviously none of the ministers from the current government are popular with most working class people. Duncan Smith deserves particular attention because of his role in workfare - including lying in parliament about the "success" of the schemes.

He has also name-dropped anarchists on more than one occasion, from crediting us with wrecking the Work Experience scheme to more recently admitting that "I sometimes get confused as to who the anarchists are and who the Labour Party members are." With the absence of the Labour Party from his welcoming committee in Bootle, we would hope he now gets the distinction.

Notice of the visit came only days earlier, on the back of which text messages and emails were sent around to get people down for an impromptu protest. Roughly ten anarchists, including members of Solidarity Federation and Anarchist Federation, turned up alongside members of the Public and Commercial Services union (PCS) and pensioners from the Unite community branch. The main picket waited at the entrance to the car park, whilst a handful of people gathered at the front entrance in case he decided to make his way in there.

Whilst we waited, a very nervous manager from the building stood with us, urging us out of the road every time a car approached. His aim was to ensure that the Work and Pensions minister's arrival was unimpeded by the protest. We had other plans, however, and the tone of his voice every time he asked us to "move out the way, please," suggested he knew it.

When at last Duncan Smith's ministerial car arrived, most of the around thirty demonstrators were stood blocking its entry into the car park. The driver edged forward, trying to nudge people out of the way, whilst the manager pleaded ever more desperately with us to be nice. Unfortunately, the car appeared to be making headway as many of the trade union demonstrators shifted to the side.

It was at this point that a female Solidarity Federation member parked her bike right in the car's path and refused to move. Other anarchists moved to join her and maintain the road block. The car still tried to move forward, but eventually the driver had to accept he was beaten and stop.

Now, PCS officials moved forward to reclaim the situation, asking that they be allowed to hand Duncan Smith a letter. This would apparently be the condition for him being allowed to move on. Incredibly, he got out of the car to take the letter from the North West Regional Secretary whilst trying to ignore everyone else around him who was heckling him with relish. Though he tried to hide it, his face was taut with discomfort.

He hastily accepted the request for a meeting with PCS following his other business in the office, before the manager escorted him as fast as possible from the picket and those less willing to sit down and talk with him.

Once he was gone, we allowed the driver to enter the car park and park up. That concluded the picket, and it is safe to say that it is as succesful as it probably could have been. The tactic of "lobbying" ministers is only likely to yield results on largely uncontroversial issues that have no bearing on class conflict. In this case, it is far more effective - and gratifying - to force them to confront our anger head on, however briefly.

This article was published on 29 June 2012 by the SolFed group in Liverpool. Other recent articles: