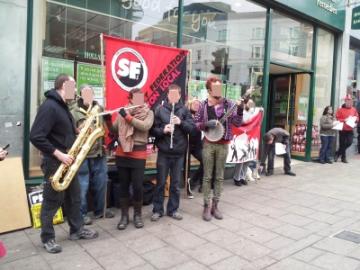 On Saturday Brighton SolFed held three separate pickets of Holland and Barratt stores in Brighton and in Hastings in response to their continued use of unpaid workfare placements to reduce staff costs. Across the country SolFed locals and other groups took part in a day of action to highlight the use of workfare by high street companies.

The national day of action was called by SolFed to coincide with the International Workers’ Association (of which SolFed is the British section) days of action which included the general strike in Spain called by our Spanish section, the CNT.

In Brighton we came together with Brighton Benefits Campaign and others – one person coming from as far as Chichester – to form two pickets at the North Street and London Road branches of Holland and Barratt. With the North Street picket attended to by around 20 people and the smaller branch at London Road picketed by about a dozen, both were well attended and succeeded in turning away a considerable number of potential customers and raising the profile of the anti-workfare campaign.

Before the picket we produced a letter that we gave to staff to explain our intentions and outside we distributed a leaflet to customers and passers-by which is available here: http://www.solfed.org.uk/sites/default/files/uploads/workfarehb.pdf

Saturday’s pickets saw the first performances of the Brighton SolFed’s new Industrial Grievance Band, playing traditional songs of the labour movement including Solidarity Forever, There is Power in the Union and the Spanish anti-fascist song A Las Barricadas. The atmosphere on the day was lively, attracting the attention of passers-by who stopped to talk and even join in with a song or two.

The manager at the North road took particular exception to our picket and called the ‘city centre ambassadors’ (another name for retail security) to intimidate us into leaving; when they failed he produced a sign pushing the government and the businesses’ line that workfare is voluntary. Even if this were true, the work experience scheme is just the thin end of the wedge and remains a threat to all workers’ jobs, pay and conditions.

There is also a detailed report from our friends at the Brighton Benefits Campaign here.

In Hastings members of Brighton Solfed and Hastings Anarchists picketed the Holland and Barrett store on Queens Road. The store is fairly small with a narrow pavement and bus stops outside. The manager of the shop called the police as members distributed the letters aimed at the store’s staff, having been instructed to do so by management as soon as pickets turned up. We stayed there for an hour and gave out 300 leaflets. We then went and did the same outside Macdonalds, another company that has used workfare staff in its stores.

At the Hastings picket the response from the public was mixed which raised a couple of issues that we need to consider in order to make the campaign work in Hastings and other areas of high unemployment: people who were critical of our picket tended only to understand our action in terms of us defending the rights of 'lazy, unemployable' people and in terms of us seeking to deny young unemployable adults the opportunity to get some experience in work.

In areas of high unemployment and deep social problems, divisions between workers can create a responsive audience for the government's scape-goating. We realise that it is important to talk about why the government has created long term widespread benefit dependency and what the result has been for our class, as well as why the government has brought in these workfare schemes to exercise greater control over their lives while subsidising private companies.

At a time of unprecedented youth unemployment, which now stands at over 22%, the government is subsidising businesses by sending the unemployed to work for them without pay and with the new Youth Contract it intends to expand these schemes even further. Holland and Barratt intend to take over 1000 people on work experience this year and with a workforce of around 4000, unpaid workers will comprise a significant portion of their staff.

In the build-up to the campaign members of the Brighton local and the SolFed unwaged network helped to produce a range of resources that attempt explain the extent and nature of the attack on workers’ that the workfare policies represents, and they have been edited into a pdf. This is just the beginning of the fight against workfare.

Accounts of some other pickets are available on the Workfare pages of the SolFed website: http://bit.ly/SFworkfare

This article was published on 4 April 2012 by the SolFed group in Brighton. Other recent articles: