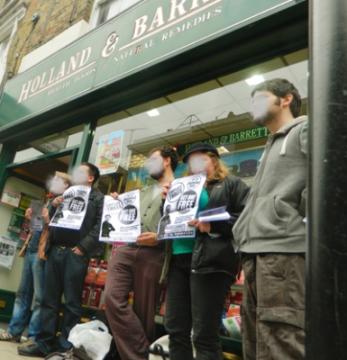 And typically of a man with no good arguments, within a few minutes he'd hit on his main point, which he then stuck to like a limpet. "Why can't you bother another shop, there's loads of us doing this." We have done, Mr Manager, lots and lots of Hollands and Barretts up and down the country.

And we will continue to, until your company and the others stop undercutting wages by taking advantage of the desperation of the unemployed and the strong arm of the state.

Your company is like that kid who bounces around behind the bully and grabs the leftover change from his victims - and the Solidarity Federation doesn't like bullies, or their sidekicks.

We'll be out there as long as we must, we'll tell your customers all about your nasty little tricks and ask them to take action on it too, until you get on the blower to your top dogs and push them to drop out of Workfare.

And with a little luck, we'll get your staff talking about this. About how your dodgy deals with the government are undercutting their wages, screwing around with their shift patterns and mucking up their work. About how, in a climate where you can't just jump in and out of a job any more, it might be worth getting together to make change, Mr Manager.

This article was published on 19 May 2012 by the SolFed group in North London. Other recent articles: