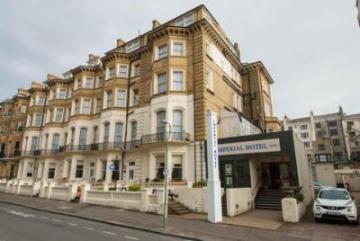 Brighton SolFed has started a public campaign against Imperial Hotel. This hotel owes a former worker part of his wages, including his notice pay, holiday entitlement, money stolen from his pay, and sick pay. The worker started at the hotel in February 2015, on a 40 hours contract.

While he was working in another hotel, which is also owned by the owner of Imperial, on what should have been his day off, the worker sustained an injury to his finger. As a result, he stayed off sick from work for one month. He did not receive any sick pay or compensation. The manager told him that he could not claim anything because he had been working for less than one month when it happened and because it was his fault.

In late August, the worker was sacked without notice. The company claim that he and a colleague stole £800 from the till. They deducted £400 from his pay and another £400 from the workmate, who has not been sacked. No proper disciplinary process was undertaken. In the past, other workers have been accused of the same thing for the same amount.

The company refused to give the worker the payslip in which the deduction for the alleged theft should be found. Subsequently, the demand letter was handed into the office and the worker went to confirm that the manager had received it. After an argument with his former manager, the worker asked for evidence of the “theft”. The manager answered that “he knows that has been him and does not need to see the CCTV”. The hotel did not respond to the demand letter and the worker is still owed the stolen money, sick pay, holiday pay, and notice pay.
Imperial Hotel is wrong in thinking that they will get away with this and, what is more, they are wrong to suppose that it will be dealt with in a discreet manner, as benefits exploitative employers.  Brighton-SolFed is going to bring this dispute to the streets and to the knowledge of the public, showing everybody the real face of this company. What is done in the dark, shall be brought to the light.

This article was published on 26 October 2015 by the SolFed group in Brighton. Other recent articles: