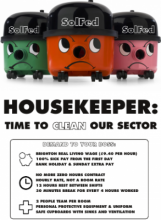 Brighton SolFed has started a public campaign against Imperial Hotel. This hotel owes a former worker part of his wages, including his notice pay, holiday entitlement, money stolen from his pay, and sick pay. While he was working in another hotel, which is also owned by the owner of Imperial, on what should have been his day off, the worker sustained an injury to his finger. As a result, he stayed off sick for one month. He did not receive any sick pay or compensation. The manager told him that he could not claim anything because he had been working for less than one month when it happened and because it was his fault.