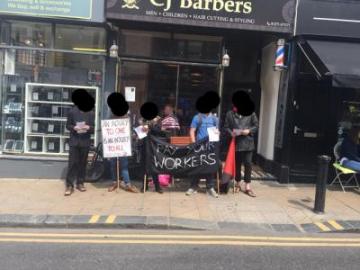 I am writing this to dispel a great deal of misinformation spread about me and my public campaign against CJ Barbers. I am the worker who was exploited by CJ Barbers and I understand why local businesses are coming out in support of their neighbours. I believe this comes from a positive place but I think you should know my side of the story before you come to any conclusions.

Before I started working at CJ Barbers I was desperate for work, desperate to find a stable career and trade I could rely on long-term. I could not afford private tuition, so to gain experience I was giving out free haircuts for the homeless on the streets of Brighton. It was while I was promoting this practice on St James Street that I was approached by a manager at CJ Barbers. After a trial I was told that they would train me if I worked as an unpaid apprentice for two months and after this I would be hired officially and paid a full salary. This sort of arrangement is illegal but is a far too common practice in the barbering trade. Because of the role's illegality there could not possibly be a contract. I was desperate and overly-trusting, so naively I agreed.

After beginning work I had a feeling that things weren't right. I was not receiving the promised education and my time was totally consumed with busy-work. I would be constantly cleaning the shop and would be assigned P.A. work, such as planning and booking hotels and flights for the boss's holiday. I mentioned to the managers that I thought that maybe I should find work elsewhere but I was assured, "Don't give up! Just think - after a few weeks you'll be on a full salary!" so I persevered.

After two months I approached my boss and enquired about when I would be paid. I was told that they were pleased with my work and my first pay check would be in two weeks. It was after this pay day when I only received £100 that I told them I could no longer afford to work there. I was told there was no hard feelings but when I contacted the following week for a reference they refused to provide one - despite me working for two months for free and being told they were pleased with my work. I later found out they also lied about my progression and ability as a barber. I was told by CJ Barbers that I was nowhere near ready to cut hair. When I spoke with barbers in other shops I discovered this to be a lie used to keep me from leaving.

I felt horrible about the whole situation. My trust and my vulnerable situation were totally exploited. I thought that these people had my best interests at heart but it was all a facade to use me for free labour until I caught on. This is why I approached SolFed who informed me of my workers' rights. CJ's did not come close to fulfilling the legal requirements needed to employ an apprentice or a volunteer - So I was in fact entitled to minimum wage for this period which would come to £2800. I have evidence to prove I worked for this entire period.

We gave CJ Barbers plenty to time to respond to our letters and agree to negotiation but they did not respond so we began our campaign. CJ Barbers have begun to use aggressive and illegal tactics against us. They have threatened to send my photo out to prevent me ever working in Sussex again, and they have also expressed interest in using my photo to post in shops framing me a sexual predator (a completely baseless accusation). They have approached the local newspapers spreading lies about the nature of our campaign making verifiably false statements about us. They have even threatened violence against me- saying they would "sort me out once they find my address".

The reason for this campaign is not just to get the money that I am owed. It is also to raise awareness and create a precedent to stop these exploitative fake "apprenticeships" in Brighton and throughout the UK. SolFed has given me the support network and information I need to begin a larger campaign against these practices. Although CJ Barbers is one of the worst culprits, the are by no means alone and we aim to use this very public campaign as a springboard from which to launch our larger mission to end these shady practices in the UK barbering industry as a whole. A minute step in an ongoing struggle for fairer treatment for workers across all trades.

This article was published on 9 June 2019 by the SolFed group in Brighton. Other recent articles: