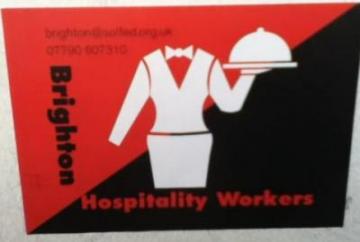 For the past few months, the activity of the Brighton SolFed local has been really intense in terms of workplace disputes. Different cases were opened, most of them in the hospitality sector, about wage theft.

In November, the former worker of an Italian restaurant approached us. He had to resign because the company owed him money, and because of the bullying and harassment that he faced in his workplace. Brighton SolFed's Hospitality Workers agreed to support the worker in this dispute and prepared a demand letter asking for the worker´s money.

The attitude of the restaurant management was simply shameful. They refused at every instance to talk to us and were aggressive and intimidating to the worker and SolFed comrades. As usual, we gave the company the chance of agreeing to a friendly solution before making the dispute public.

During the period of negotiations, we had to endure really pathetic scenes: a notice to the worker for harassment, the assault to a comrade when he tried to hand over the demand letter (which in the end had to be sent by recorded post), and a call to the police falsely accusing SolFed members of attempting to break the windows of the shop (a ludicrous accusation; if we break shop windows, how will we know where to stand? DUH!). Fortunately, none of these episodes had serious consequences.

However, it seems that the management of this business is not completely stupid and, at the last minute, they got the message that they will not be able to stop us by threats and intimidation. They decided to pay what the worker was owed just hours after the deadline that we gave them, thus avoiding the dispute becoming public. On 17th December, the worker had the money in his account.

This December, a worker involved with Brighton SolFed presented to the group a case of wage theft that she was having with the agency that she was working for. Once again, the company had decided not to pay her holiday entitlement.

We supported the worker in contacting this agency, which is well known in Brighton for their bad behaviour towards their workers. We told them that they should pay the worker immediately or we would start a dispute in which we would make sure that everybody in Brighton (especially their workers) is aware of their practices.

This week, we received an email in which this agency promised to pay the worker all that they owed her and to give her P45 and payslips.

We are really happy with these two victories – both cases involved migrant workers, and we hope this money will help these two comrades during these days in a city where life is not easy for migrant workers. For us, the most important thing is the experience of solidarity and direct action that we have shared. This convinces us that we can improve our lives by staying together and that we do not need politicians, judges, or policies.

However, we are quite aware of our limits. We would like to have had the chance to publicly attack these two miserable businesses that make their profits stealing from the workers. We are afraid that they, like many others in Brighton, will go on with their practices but, at least, they have realised that sometimes people will work together and fight back. Currently we have other cases open and we are sure that next year will bring many more struggles.

We would never appreciate enough all the proofs of solidarity that we are receiving and, especially, the exemplar commitment, rebellion, and generosity of the comrades.

This article was published on 31 December 2014 by the SolFed group in Brighton. Other recent articles: