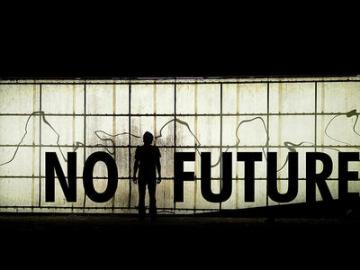 Paul Mason, BBC Newsnight’s economics editor has suggested of the unrest in Tunisia, Egypt, Greece, France, London and elsewhere that "at the heart if it all is a new sociological type: the graduate with no future".[1] All manner of lefties have been standing in Library Square, entreating us to 'defend education' with petitions, placards and processions. Few of us have taken up the request. What is there to defend? The current education cuts will no doubt make things worse, but it’s not education we need to defend but our conditions of life, both at university and more importantly for the rest of our lives. We need to turn our critical faculties both on our education and on the society it is preparing us for. Do we have a future? Is it worth the sacrifices it demands?

"A university degree today is not a sign of becoming middle-class. It’s a way for the working class to make themselves suitable for the post-industrial workplace. This must be the basis of any class analysis of the current argument."[2]

The skills, habits, discipline and modes of thought imparted via a university education are those appropriate to the modern flexible labour market: self-directed labour with minimal supervision, strong communication skills, the ability to digest and present complex information and the ability to produce work on-demand to more or less arbitrary criteria (marking is essentially a tick-box exercise against a scheme with which we are provided. In the 1970s Sussex students boycotted assessments, rejecting such production-line education [3]). Within the year, we’ll all be scrambling over one another to compete for scarce, or non-existent, jobs. Since the specific content of a masters degree is only relevant to a narrow range of specialist employers, it is the aforementioned qualities implied by ‘having a degree’ which are most pertinent – ‘transferable skills’. In fact, even if you want to work in a related area, the degree itself is not enough.

The careers advice in our course handbook points out that "while a good postgraduate degree in a relevant subject from a good university (like Sussex) is vital, all your competitors will have one too."[4] Instead we’re expected to scour and beg for internships, usually unpaid or at best, low paid. If you are willing to provide months of labour for free, "if you can get a foot in the door this way, work as hard as you can, make yourself indispensible and you might – might– get paid work later on."[5] In other words, if you’re really, really lucky you get to write on your CV 'I'm willing to bend over backwards and work for nothing'. Employers like that skill-set.

The kind of jobs related to our degree subjects are the dangling carrot for many of the more idealistic amongst us, who dream of being able to make a living 'making a difference', perhaps in international development or NGO work. Even for the successful, this is mainly a mirage. Overwhelmingly those institutions with the resources to employ graduates have a stake in the status quo and are part of the problem they notionally oppose. There's no space to flesh that thesis-length claim out much here, but do you think NGOs and not-for-profits somehow operate outside the amoral world of geopolitics that we’ve studied so much? A former development worker offered this cautionary advice to students on a similar programme at Cornell University (his full speech is well-worth a read):

"As you prepare for and look forward to careers in international development, I am compelled to issue a warning. With the hindsight of someone who spent five years in the development business, I'm going to tell you that the development industry hurts people in the developing world. Its greatest success has been to provide good jobs for Westerners with graduate degrees from institutions like this one."[6]

And that's for the tiny minority of us who manage to jump through enough hoops and work enough unpaid internships to get such 'rewarding' work. In terms of actually using the content of our MAs, that leaves academia. That means finding the cash to finance a PhD, which normally means self-financing and/or working. Typically, PhD students work as Associate Tutors (ATs) to help cover the costs of their education. The university is happy with this, it helps casualise and fragment the workforce with highly skilled but low paid casual workers. There is a well-worn path from critical student to comfortable academic, with some honourable exceptions. But every critical academic should well know that "not criticism but revolution is the driving force of history" (that one’s from our core reading!).[7] Academia is no place to make a difference; for a handful it may be a place to make a living. And even the space for critical academics is being further eroded by massive cuts to humanities funding in the cause of making education yet more functional to capital.

But in truth, the vast majority of us will not become NGO staff or academics. We will be thrust back into the stagnant labour market to look for jobs with no direct relation to our degrees. Take a glance at any jobs website for an image of the future: telesales… temp admin… credit control… temp finance assistant… customer service agent. This is what we've paid thousands of pounds for: 'transferable skills' to better market ourselves for interchangeable drudgery (assuming of course we find work, with record numbers out of work and big lay-offs still to come). Student debt will help keep us locked on the treadmill, moving from one low-paid cul-de-sac to another. "Current estimates are that 420,000 Britons are challenged with work-related stress at a level that is making them ill with conditions such as depression and anxiety. Surveys have suggested that approximately 1 in 6 working adults believe their job is highly stressful."[8] Austerity isn’t going to improve the situation. How long will you last? 40 years of this shit?

The current education cuts are not an attack on some ideal education for educations sake which we can 'defend', they are simply an acceleration of the neoliberal reforms already in motion under Labour. If the university is a factory; we are its product.[9] But we are a unique commodity in that we possess the capacity to think: let's do so. The critique of education demands a critique of society and our place in it. To be disillusioned is not a malady. Ridding ourselves of illusions in an uncertain future is a necessary step in disputing the precarious fate the vagaries of market forces and neoliberal reforms have assigned to us. If events in Tunisia and Egypt teach us anything it’s that a different future is always impossible – until it happens.

2. Deterritorial Support Group (2011), ‘FREE/GRATIS- education as sabotage and the poverty of student rhetoric’, available at: http://deterritorialsupportgroup.wordpress.com/2011/02/11/freegrati/

3. Goddard, Ed (2011), ‘Student Radicals: An incomplete history of protest at the University of Sussex 1971-75’, Available at: http://libcom.org/library/student-radicals-incomplete-history-protest-un...

8. Anon (2011), ‘How Common is Depression?’, available at: http://www.overcomedepression.co.uk/HowCommonDepression.html [not a proper academic source, bah]

This reads well, given who

This reads well, given who it's aimed at. As a more general reader I'd suggest making more of the internships stuff. It's long been a way of making the best paid or most creative and interesting jobs available only to the wealthy. This is accelerating, and I think it is something we should focus on. There's no reason at all that the civil service or local govt should be using interns. I dunno, maybe everyone this is aimed at knows this already. Private Eye has hinted at test cases on internships coming soon.

Also, 40 years of this shit? You'll be lucky. It'll either be a lot less as you're thrown on the scrap heap and can't get another job past 50 (I know plenty of people this has happened to). Or you'll have to soldier on to 70 plus, waiting for your pitiful pension to be worth retiring on.

I would add that on some level its expected that Universities are seen as covering for the poor state of high school education, that point probably needs to be made diplomatically and its not seen as a swipe at people who work in 11-16 education. But its widely seen that English and Maths have eroded for some time.

Higher Education is also seen as a way to mask high levels of unemployment by taking out newly emerged workers (and mature workers between jobs) for several years at a time and allowing them to accrue large levels of debt that they will need to work off in the future.

And even the space for critical academics is being further eroded by massive cuts to humanities funding in the cause of making education yet more functional to capital.

This needs to be placed in the context of the entire of education becoming more vocational. We now have private companies giving out grants, sponsoring academies etc and a government which is clearly targeting soft qualifications, ie non-vocational subjects.

And overseas students do feed into this. They are charged the higher rate of fees, pay extortionate amounts for visas etc, universities are expected to police them on a level equivalent to the UKBA and after they graduated they are granted a year visa to work in industry, which is used as a way to undercut the local job market through a visa clientele system.

i've made this public, but

i've made this public, but that doesn't mean it's a finished article. people here (and in person) have made a lot of good points and i think it could be improved/expanded, or further articles written to develop the theme.