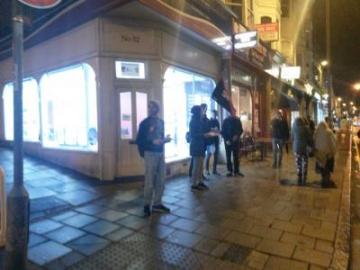 The agency has stolen the holding deposit of a tenant. SolFed has been trying to negotiate a settlement of the dispute the last weeks. The total amount owed by the agency is £425.

Brighton SolFed has recently opened a dispute against a letting agency in Hove. One prospective tenant had her whole deposit withheld after the letting agency unilaterally terminated the “good-faith” agreement, on the basis of an unfounded and prejudiced accusation. The tenant paid £650 at the beginning of September as a holding deposit - which are not covered by deposit protection schemes. Ten days later, the agency announced that the full holding deposit would be withheld.

The tenant refused to let them get away with this, going through an arduous complaints process just to try to get her money back. Eventually, the agency conceded to return only half the deposit - a clear recognition of their mistake while simultaneously trying to make the tenant (who was out of money) drop the case.

The tenant feels she was treated in a demeaning manner by agency staff, and was distressed by the unexpected and unjustified loss of her prospective home. Therefore one of the demands is an apology for the treatment she suffered.

SolFed handed a demand letter to the agency at the beginning of November. The agency, in an attempt to shirk its responsibility, started alleging that we should follow its procedure. A slow and technical procedure that is only intended bore and dissuade the tenant.

The problem for the agency is that SolFed does not hide disputes in administrative or judicial procedures. Our intention is to bring every dispute onto the streets. Not just because it is faster, cheaper and more effective, but also because it is the only way we can understand that each of us has the same problems. Through solidarity and direct action, ordinary people have the power to improve their lives - and ultimately create a new society.

This article was published on 16 November 2015 by the SolFed group in Brighton. Other recent articles: