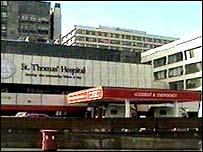 Where are the St Thomas' disappeared?

Where are our workmates?

Last month 72 workers disappeared from Guy’s and St Thomas’ hospitals. They were part of the hospitals’ ancillary staff. They are migrants. Where did they disappear to? The economic crisis means their cheap labour is not as useful anymore – at least for the moment. So the UK Border Agency was called in to get rid of them. The NHS trust complied. The workers were either arrested or deported.

The workers who clean the hospital and feed the patients earn around the minimum wage. And due to the UKBA the workers are not even always paid for their hard work. Isn’t this slavery?

As hospital users, as workers, as trade unionists, as migrants’ rights activists we cannot stay silent in the face of this brutality. Exactly when cuts and privatisation are threatening our public health service the exploitation of migrant labour increases. This is an attack on all workers.

We call for solidarity with the disappeared, with all migrants, with all workers, on Friday 18th February 5pm to 7pm outside St Thomas main entrance (Westminster Bridge Road London SE1 7EH). Called by the Cleaners Defence Committee, No One Is Illegal, Hands off my Workmate, Latin American Workers’ Association.

This article was published on 16 February 2011 by the SolFed group in South London. Other recent articles: