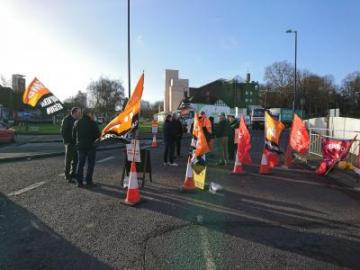 GMB and UNITE members who work on the Woolwich Free Ferry are taking strike action every Friday. Against a background of long-running health and safety issues, they are coming out in solidarity with a female colleague who brought a complaint about persistent sexual harrassment by her offce boss. She was then left facing him every day at work for 3 weeks.

It is a credit to the ferry crew that they didn't hesitate to take action to support their colleague, who after being subjected to unwelcome personal comments and offensive behaviour for over a year, had the courage to record and report these events, only to find herself vulnerable to further harassment.

After the death in 2011 of Ben Woollacott, who was pulled overboard by a mooring rope, SERCO lost the contract to operate the free ferry and Briggs Marine Contractors Ltd. have been operating the service since 2013. They are a company based in Burntisland, Fife, with international experience and interest in the marine industry.

They are not short of resources, having a £100 million contract to maintain navigation buoys for the Royal Navy, as well as valuable deals with BP, Exxon Mobil and Scottish and Southern Energy. They also provide 'navigational aids' for Forth Ports and Peel Ports and 'marine management' for the Environment Agency.

However, the ferry crews recount a catalogue of problems - including oil and fuel leaks, safety-crucial generators failing and a leaking diesel engine, instead of being fixed, being vented into the passenger deck. Workers report that health & safety is being compromised through lack of training and that the bosses are trying to cut costs by failing to abide by agreements. Joint meetings between the GMB and Unite members have resulted in a solid strike, and their reps say that Briggs are going to be very keen to resolve the dispute at ACAS talks which start today, Friday February 3rd.

If Briggs Marine fail to address the culture of sketchy maintenance, poor safety culture, sexual harrassment and bullying we can expect further strikes every Friday. The ferry is crucial to London's freight movements. It depends on the dedication of its crews, many of them having decades of practical experience working on the tidal Thames. They know how to provide a safe and well-run service.

This article was published on 3 February 2017 by the SolFed group in South London. Other recent articles: