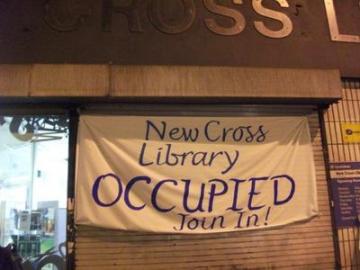 At 5 pm on Sat 5th feb, a group of about 30-50 local people, including members of SolFed and other local anarchists, occupied New Cross library. Initially this had been part of a national ‘read in’, supporting threatened libraries across the country, but developed into an occupation as participants decided to stay.

As the only occupation out of 450 read-ins, New Cross got a good amount of press. This was more or less the aim; getting publicity for the libraries campaign and keeping up the momentum of the anti-cuts movement in general.  As one optimistic campaigner, James Holland, put it; “I think with this occupation we are going to take the libraries campaign – and the anti-cuts campaign in general – to a whole new level.”

The occupation was fairly low-key, only lasting (intentionally) till 12pm the next day. There were  stand-offs with police and security about letting people in, the first of which was won and the second (for the last half hour of occupation) was lost. For the majority of the time people were coming in, bringing food, talking, reading and playing games. It was a great space to have and really impressed the need for a local venue to act as a hub for anti-cuts activities.

This article was published on 9 February 2011 by the SolFed group in South London. Other recent articles: