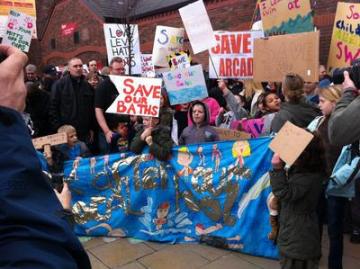 On 8 February Labour-run Manchester City Council was the first to announce its budget cuts - £109 million worth. Among community amenities being axed were several libraries, some advice centres and half a dozen fitness and leisure centres. The south Manchester neighbourhood of Levenshulme – ethnically and economically mixed with some pockets of severe deprivation was the worst affected – facing the loss of its leisure centre, Sure Start scheme and its historic swimming pools.

The baths were a contentious choice to cut by the council, which had spent more than £200,000 in 2010 upgrading the facilities  but was insisting full refurbishment was too expensive at more than £300,000 and the only viable option was to close it.

At lunchtime that day, around 50 people demonstrated spontaneously outside Levenshulme Baths. Most were women concerned at losing their cheap gym facilities and swimming lessons for their kids. Many had never met before but were so angered by the cuts they decided to protest again at 6pm. This time the crowd numbered more than 200 as word spread and it attracted national news coverage.

The women met again next day to plan a campaign and formed working groups to make flyers and banners, and one to develop a viable business plan with a view to taking over the baths and running them as a community owned asset. A petition was organised on the internet and paper copies were left in every shop in the area, while everyone was urged to contact the council to object during the consultation period. The Facebook group quickly attracted more than 500 people and a similar number turned out for a march through Levenshulme two weeks into the campaign.

The group also made sure it had at least two public events a week to keep up momentum and ensure media coverage. And despite the local Lib Dems (who are also councillors in Levenshulme) and a community association that is a front for Respect each setting up their own “save the baths” campaign and taking credit for the activity but doing little, the community-based and determinedly non-party-political Save Levenshulme Baths group was the one that scored a victory in the end.

Just 20 days after the budget cuts were announced, the council reversed its decision to close Levenshulme Baths because of the overwhelming strength of public feeling and show of strength on the streets. Not only has the executive has been ordered to find the money to build a new baths in two years’ time when it has funds for capital expenditure again, but it has also been told to find the cash to keep the old baths open in the interim. As the campaigners chanted in celebration, “From Cairo to Levenshulme, people power really does work!”

Save Levenshulme Baths has now been renamed Friends of Levenshulme Baths and will work with the council to find the most practical and cost-effective ways of keeping all the facilities there running as normal. And it’s also become Love Levy Hate Cuts, and is working with other anticuts groups in Manchester to fight the cuts generally as well as work to save the other neighbourhood amenities still threatened with closure.

This article was published on 2 March 2011 by the SolFed group in Manchester. Other recent articles: