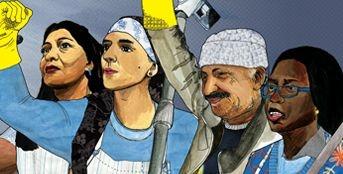 Coming on the back of other successful living wage for cleaners campaigns, the John Lewis cleaners are demanding an immediate increase. From there, they expect a binding plan from management to eventually reach the £8.55 per/hour (plus full sick pay) which constitutes the London Living Wage. The LLW is the bare minimum that has been determined that those in full-time employment can survive on in the capital.

The cleaners, who are organised with the Industrial Workers of the World, are demanding that the living wage be granted without hours being cut and without any intensification to the already hard job which the cleaners do.

The North London Solidarity Federation stands behind the IWW in demanding that John Lewis stop hiding behind the facade of subcontractors and ensure that anyone who works inside John Lewis shops be given the London Living Wage. To that end, SolFed members will continue to attend, support, and promote any pickets, protests, or actions which are called by the cleaners.

For a living wage for all workers with no cuts to hours and no speed-ups!

This article was published on 13 November 2012 by the SolFed group in North London. Other recent articles: