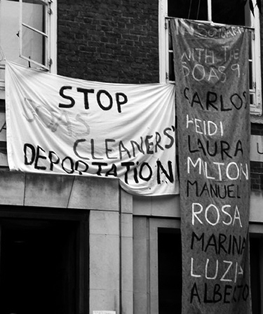 SOAS runs courses on migration, human rights and refugee studies, yet treats its own migrant workforce as “disposable”. The SOAS Directorate building was blockaded and the Principal’s office occupied.

The SOAS management was forced by the scale of the protests and the negative publicity that the university was receiving to issue a statement denying advance knowledge of the raid, saying that it had been “distressing for everyone” (but more so for the cleaners!) and that such actions by the UK Border Agency were normal practice across the country.

In education as in the whole public sector, services are increasingly being tendered out to private companies who drive down costs to get contracts and boost profits. In a growing number of cases, this leads them to employ migrant workers, against whom immigration controls can be used when they organise to improve their pay and conditions.

In this case, direct action forced the SOAS Directorate to agree to write to the Home Office asking that the cleaners be given indefinite leave to remain. In addition, they agreed to consider bringing cleaning in-house when the current contract expires. Protests also took place at the Yarls Wood Immigration Removal Centre in Bedfordshire where the workers were being held, outside Communications House in Old Street where cleaners had been taken to from SOAS, and at the Home Office in Westminster. However, by the end of June only one of the detained workers had not been deported.

The SOAS case shows what can be achieved by direct action and by workers and students breaking down the artificial barriers which separate them. While ultimately unsuccessful in stopping the deportation of cleaners, the creeping privatisation of education has been shown to be stoppable, and management at a major London university have been forced to abandon the pretence that contracting out services absolves them of responsibility for their workers. For the SOAS example to be repeated across the sector, we need a permanent organisation of education workers which is willing to take direct action, willing to link up with students, and which does not fall foul of the bureaucracy and turf wars which have for far too long bedevilled the reformist education unions.