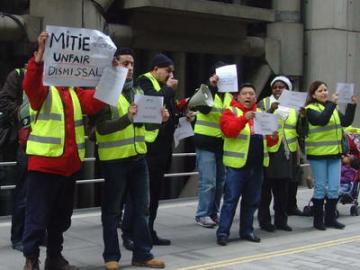 Latin American cleaners on Friday 3rd April held the latest in a series of weekly demonstrations outside their former workplace in the insurance firm Willis in the City of London against the sacking of five of their colleagues by the Mitie cleaning contractor. The four men and one woman were dismissed following an email conversation with management, in which the cleaners registered their unhappiness at a sudden change in shift patterns, done without consultation.

The Mitie Five were clearly considered to be the ‘ringleaders’, yet this campaign has been organised by all the cleaners, using the resources of their Unite union when necessary but acting on their own initiative when the union has not given them what they want. A recent deal between Unite and Mitie was rejected by the cleaners, who consequently found themselves abandoned by the union. Their firing is also clearly linked to the recent Justice for Cleaners campaign, in which Mitie and Willis were forced to increase the cleaners’ wages from a minimum wage of £5.73/hour to £7.20/hour.

Following the cleaners’ victory, management changed their shift times from 7-11pm to 10pm-6am in a deliberate provocation. As one cleaner commented, “I have four children in school. How can I be expected to suddenly start working all night and not be there for my children in the morning?” Many other Mitie employees work second jobs, which have now been thrown in jeopardy by the shift changes.
The demonstrations have yielded responses from both Willis – who insincerely claim that the cleaners’ pay does not concern them – and Mitie, who recently called the cleaners into “negotiate”, only to issue them with a lawyer’s letter accusing them of libel! Regardless, the struggle continues, with the cleaners determined to win their jobs back.

Despite working on the same streets as the nation’s new Public Enemy Number One (the greedy bankers of the City of London), migrant cleaners represent some of the most poorest and most vulnerable workers in the UK, and have found themselves on the frontline of the recession’s assault on living and working conditions. The Square Mile has been the target of various attacks in recent weeks, but while a smashed bank window may make for a good photograph, it is struggles such as these which have the potential to reverse the consequences of the economy’s implosion via workers’ self-organisation.