The North London Solidarity Federation would like to extend our deepest solidarity to the John Lewis cleaners engaged in a struggle to secure the London Living Wage.  By exposing John Lewis' overt failure to live up to its proclaimed co-operative model, the cleaners have shown that company schemes are not the way to secure a decent wage.  Instead, only collective struggle can force bosses to provide us with decent working conditions and respect on the job.

Members of North London SolFed will make every effort to turn out to support the cleaners at their upcoming strike and will encourage all our friends and contacts to do the same.

London Living Wage for All Cleaners!  No Cuts to Hours!  No Speed Up! 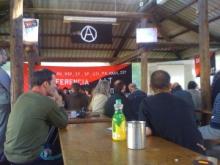