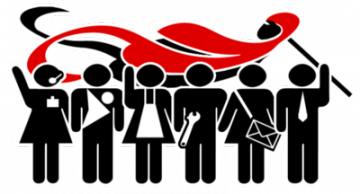 The North and South London Locals of the Solidarity Federation extend our solidarity to the workers at Queen Mary University. With the threat of redundancies across campus, workers have become energised, linked up with students, and exhibited a growing degree of organisation. In response, university management have suspended the Queen Mary UNISON branch secretary on trumped up disciplinary charges.

While the Solidarity Federation recognises the power of the union rests not in its officials, but in an active and self-organised membership, management clearly believe they can defeat their workforce by 'beheading' the union. Such attacks must be resisted.

London Solfed are proud to have supported QM staff before—handing out leaflets and speaking to students—and we will continue to offer our fullest solidarity in the future. To that end, we will attend and promote any meetings, events, and actions called by workers or students which seek to challenge management's cuts and victimisations.

Only through solidarity—standing together within the union, across unions, and with non-union co-workers, organising alongside students, and refusing to cross picket lines—will we be able to beat these redundancies and this unjust suspension.

This article was published on 20 October 2011 by the SolFed group in North London. Other recent articles: