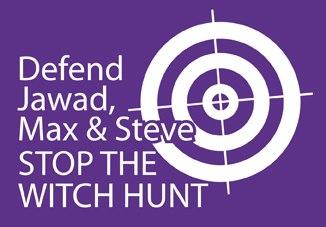 London Metropolitan University made the news worldwide last year when, due partly to their connections to the London School of Business and Finance, they were investigated by the UKBA and were prevented from recruiting international students.  (for details see Education Worker 9, London Met UNISON’s website or Andrew McGettigan) Now that the dust has settled from this scandal, London Met is again in the news, this time because it has suspended three of its workers, in very suspicious circumstances.

The reason given for the three suspensions is the recruitment of Jawad Botmeh to an administrative post in the London Met’s Working Lives Research Institute (WLRI). Jawad has worked in the WLRI for five years, initially in a temporary role. When he applied for the job he was honest about the fact that he had been in prison for some time. Jawad served 13 years in prison on a conspiracy charge. He has always maintained that he is innocent, and his case is seen by many as a miscarriage of justice, Amnesty International have concerns that he was denied the right to a fair trial, and pointed out that he had an alibi and there was no direct evidence against him. Jawad also had support from MPs  MPs Harry Cohen, Tony Benn and Jeremy Corbyn and from UNISON nationally. WLRI chose to give an opportunity to a former prisoner, and have had no concerns about employing Jawad and there have been no complaints about his work. London Met were made aware of his conviction when he applied for his job, and when he then applied for a permanent post. It was only when Jawad was elected as the staff governor that London Met suspended him.

Here’s where the plot thickens. As well as suspending Jawad, London Met suspended Max Watson, who is chair of the London Met UNISON branch, as well as being on the UNISON NEC. London Met UNISON are one of the most active and militant higher education UNISON branches. They have stood up to management over threats of redundancies and outsourcing, they have taken strike action on a number of occasions and have achieved at least partial victories. They have also supported the already outsourced workers and helped them to win their Living Wage campaign, which is a considerable achievement given London Met’s current circumstances and management’s attitudes. Outsourcing is still on the cards for a lot of non-academic workers. Management have recently been targeting Max as he has been outspoken about the union branch’s opposition to outsourcing. Max’s suspension may well be an attempt by London Met management to get him out of the way, either permanently, or at least for the time being while they push through their plans for privatisation.

A few days later, Steve Jeffreys, head of WLRI was also suspended.  The next day, the Head of Human Resources resigned.

Unless management back down, it is highly likely that the UNISON and UCU branches will be balloted for industrial action, in which case they will have support and solidarity from many education workers.