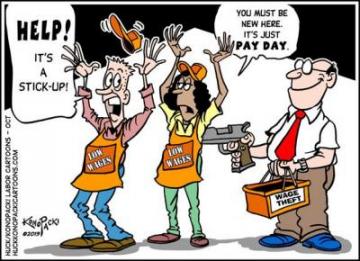 Given that the chances of being caught are low, and even when they are caught, often the only punishment that companies face is paying back what they have stolen, it is little wonder that companies are increasingly not paying the minimum wage. In 2016, one in five workers aged over 24 was paid below the legal minimum. This figure dramatically increased in 2018 to one in four, with about 365,000 people missing out. The figures for 2019 show yet another rise, with 439,000 people illegally paid below the hourly minimum wage.

No doubt, the alarming increase in the number of companies not paying up has forced the government to reintroduce the naming and shaming of employers who fail to pay the National Minimum Wage. The government stopped this practice two years ago, after a concerted campaign spearheaded by larger companies.

Though the decision to reintroduce naming and shaming should be welcomed – after all, every little helps – it hardly amounts to the government declaring war on companies who, after all, are breaking the law. It interesting to compare the approach taken by the government to companies acting illegally with the approach taken towards so-called “benefits cheats”, who routinely have their benefits stopped and can face up to 10 years imprisonment.

The reintroduction of naming and shaming may deter some companies, especially larger companies, but it will do little to stem the overall rise in companies refusing to pay the minimum wage. The solution is not to rely on pretty feeble government laws but, instead, to mount campaigns backed by direct action aimed at companies breaking the law.

Here at SolFed, we are proud of our direct actionist approach aimed against companies guilty of wage theft. If you want to get involved or you are not being paid the minimum wage, please get in touch.

This article was published on 23 February 2020 by the SolFed group in Manchester. Other recent articles: