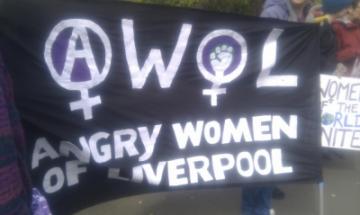 I arrived at the meeting point early, and there was already about 20 people there from Liverpool and Leeds Anarchist Federation, AWOL, trade unions and Solidarity Federation - we even had a few living children. We were armed with red and black flags, purple and black flags and plenty of placards with slogans such as ‘Legal Abortion Saves Lives’ and ‘If I wanted religion in my uterus, I’d **** a priest’. We also had leaflets with a brief summary of what it meant to be pro-choice and some facts about abortion. A PCSO, who’d clearly not been briefed, came over to ask us what we were doing. Upon not getting any clear answer she left us to find the anti-choice lot and we walked towards the church on the busy main road where the vigil was to be held.

We arrived at the same time as them and it was clear that, even though not all of us had turned up yet, we’d be outnumbering them by at least 2 to 1. We busied ourselves with blocking their placards reading ‘Abortion Kills Babies and Hurts Women’ followed by a premium rate number people could call if they’d been ‘hurt by abortion’ with our more colourful and less judgemental placards. When doing this, I met a particularly angry anti-choicer who told me I’d fall to my knees and repent if I knew what I was doing. I challenged him and he refused to answer my questions such as ‘do you know the far-reaching consequences of banning abortion’ and this seemed to be a theme for the day. They refused to listen to doctors, social workers and women.

I made a new rule for myself: I don’t engage with regular fascists, so I refuse to engage with body fascists too. We continued to chant "pro-life, that’s a lie, you don’t care if women die," drowning out a round of Hail Marys and winning support from those going past in cars, who accepted many leaflets when they were stopped by the traffic lights - we only got called baby killers once or twice. When the anti-choice lot packed up at the end of the day they told us that they’d pray for us. This was not gratefully received.

I would definitely consider today a pro-choice victory. We outnumbered them as a group of seasoned activists, anarchists and people who had never been to a protest before. Despite previous ideological differences we united against anti-choice religious body fascists with no problem. There were also a fair few men, supporting women instead of taking the floor from them. As someone who has had a problem with misogyny amongst the far-left for some time it was refreshing. The public support was also very encouraging and hopefully we did a good job of reassuring female passers-by that there are plenty of people who won’t judge them if they exercise their right to choose.

Overall, there were so many positives that came out of yesterday. Liverpool Solidarity Federation has been talking more and more about gender issues and I expect that we’ll discuss this at the next meeting, planning how we can oppose anti-women sentiment, religious or otherwise, whenever it crops up.

This article was published on 29 April 2012 by the SolFed group in Liverpool. Other recent articles: