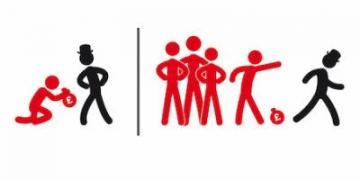 Below is the write-up of a successful campaign organised by a tenant and Brighton SolFed against a deduction to that tenant's deposit. The three month public campaign concluded in April 2018 with a £450 payment to the tenant, who had had £390 deducted from her deposit. Please note that the article contains brief discussion of post traumatic stress disorder.

I felt so neglected by my agency. The agent assigned to me was patronising and my concerns were not listened to - I felt little. There were some difficult situations in my house during my tenancy. I have PTSD, which was not helped by these situations or by my complaints not being taken seriously. The house was hell to live in - agencies throw students into houses with one another so they get their fees or their cut of the rent, and then wash their hands of any responsibility. I would call the agency crying and they would just tell me to pay my rent. It felt like they were trying to turn me against my flatmates.

At the end of my tenancy, the agency was attempting to deduct £390 for cleaning and redecoration, in spite of me leaving the property clean. They were also trying to make deductions for issues I had reported during my tenancy that weren't my fault. The £50 call out fee for having to attend the flat after I reported one of these issues was indicative of how bad they were.

Me and my Mum were going to take them to court, but then we realised they made a system that effectively prevented that. I contacted SolFed through a drop-in at university. I honestly had zero idea what to expect and I did not think it was possible to win via a public campaign. It's not the kind of thing I had been involved in before. I would say I'm a feminist and I debate and stuff but I felt like I didn't have a voice. I do now.

Around four SolFed members helped me to write to the agency in December 2017, outlining the issues and demanding the return of the deposit, as well as compensation for the stress of having to deal with these attempted deductions. The agency did not make an offer to resolve the situation and instead referred the issue to the dispute resolution service of the Deposit Protection Scheme. We started the public campaign after that, with a picket of one of the local branches in January 2018.

My experience of the public campaign was quite nervous at first. I felt like I had to have a pint before and like I didn't have a voice but I got more confident. At first, it felt so silly if I'm honest because they were so blasé. When they realised it wasn't going away, though, they were not happy. To be fair I loved it. You rarely get retaliation and it felt so bloody good.

At first, the agency responded to the ongoing pickets by threatening legal action. SolFed continued to offer them opportunities to negotiate, which they refused to do. Eventually we escalated the campaign to pickets of multiple branches of the agency across the country. After a final legal threat, which SolFed made public to show how the agency was treating me, they started negotiating and we agreed a goodwill payment of £450 in March. Winning feels fabulous. Such a relief. It’s helped me to pay some bills that I needed to pay, and the confidence I have gained from the case is kind of indescribable. The affect it had on me changed my mother too. She's become much more politically active since this all happened.

My advice to other tenants would be: I admit that this way of getting your money back or getting a company to listen to you must seem so weird. Be patient. You will get some form of retaliation but you must be patient. We won and we taught them a lesson – I think they will think twice about treating students a certain way again.

This article was published on 14 May 2018 by the SolFed group in Brighton. Other recent articles: