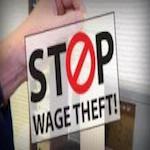 A worker organising with Brighton SolFed has recently won a dispute with their North Laine employer, Natulia on Sydney Street.

Natulia, whose contribution to the community is to - thankfully - be Brighton’s only "savoury waffle and bubble tea cafe"(!), opened its doors in Janaury, but is already gaining a reputation as a home for poor working conditions, bullying management, and a staff that turns over faster than its salmon waffles.

The worker organising with Brighton SolFed started their employment with a four hour unpaid trial shift, an exploitation that very much set the stage for what was to come. Once hired, the worker was never presented with a statement of particulars (let alone a contract) in a flagrant breach of employment law.

The management of the cafe turned out to be aggressive and demanding. The worker has described being “shrieked at” by their boss, and of management making derogatory comments to the workers about other workers.

Originally, it was agreed that the worker was to be paid at a rate at £9 an hour. So, it was a less than pleasant surprise when they opened their payslip on the second month, only to discover that their rate of pay had been docked to just £8.50, with no explanation or warning! On top of this, no holiday pay was paid throughout the worker’s entire time there.

The last straw came when the worker’s payslip for the third month came in, but no money came into their account. It was then the worker left, and got in contact with Brighton SolFed. We calculated that the worker was owed over £1,000.

After sending a demand letter threatening a direct action campaign against the company, Natulia paid up on the day of the deadline with an offer. While not being the full amount demanded, the worker decided they were happy with and accepted the payment.

Throughout all of this though, Natulia at no point got in contact with SolFed- presumably they were too embarrassed to admit to any wrongdoing. However, it is vitally important that Natulia learn that this kind of shameless exploitation is not acceptable in Brighton (or anywhere else for that matter), and they and other bosses learn they will be held publicly accountable for their actions.

The fight to clean up Brighton's rotten hospitality sector carries on!

This article was published on 19 November 2018 by the SolFed group in Brighton. Other recent articles: