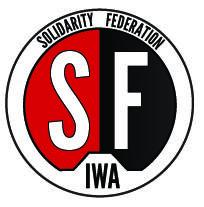 This past weekend saw much of North London Solidarity Federation take to the streets of London in celebration of May Day. Six others of us, however, took the opportunity to hop the train to Brighton to attend SolFed's national conference. Reflecting the fact that SolFed is an active and growing organisation we were joined at conference by approximately a third of the national organisation. We were also lucky to have two observers from the Swedish Syndicalist Youth Organisation, the SUF, who brought not only greetings from our Swedish comrades but were keen to participate and exchange ideas and experiences.

Conference was busy but incredibly productive. SF is consciously moving towards becoming a workplace-based “political economic” organisation—a fact reflected in what must have been a near record amount of motions and amendments on the table. However, the meeting was well-chaired and conference's delegatory structure ensured that even those who couldn't make it to Brighton still had an equal voice in the direction of the organisation. Coming out of conference, SF will be developing a number of pamphlets and training workshops to improve not only our internal abilities but to make it easier for locals and individuals to get active in their workplaces and communities.

The second day of conference saw breakout sessions for each of our industrial networks and we had various and very productive discussions on a number of topics ranging from SolFed's gender imbalance, how we deal with the media, and the potential national teachers strike on June 30th (notably, how to spread the strike to all education workers—something the trade unions seem loath to do). Finally, SF has a new (provisional) national logo! For years our unofficial logo had been the “SF face” (the so-called the “cold-dead eyes of anarcho-syndicalism”) and many members are relieved our logo has received a much-needed facelift.

North London's heartiest thanks goes out to the Brighton local. The venue was lovely, the hospitality overflowed, and the entire event was well-organised and enjoyable.  As the weekend closed, we were free celebrate our class' holiday, May Day. Conference attendees Convened at a local anti-cuts rally and SolFedders could be seen swigging champagne from the bottle, chatting politics, and making new friends.

This article was published on 3 May 2011 by the SolFed group in North London. Other recent articles: