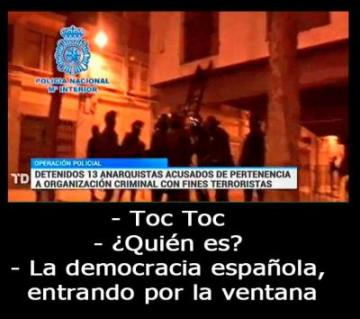 Last Monday the 30th of April there was a new repressive strike against the anarchist movement in Spain. Thirty eight people were arrested in a police operation under the name ”Operación Piñata”. Fifteen  of them are facing charges of terrorism and five are in preventive imprisonment. Private homes, social centers and squatted spaces were registered in Madrid, Barcelona, Palencia and Granada.

Raids were carried out in a very open way, trying to create social alarm. The media is publishing names of people and groups and presenting as facts fake accusations. They talk about “anarchist terrorism” and organisations with leaders, hierarchical infrastructures and varied recruitment methods.

This is the continuation of police operation “Operación Pandora”, which took place last December within a context of constantly increasing repressive politics from the Spanish government.

Solidarity actions have already started across Spain. It is very important to show that our comrades are not alone and that we are not scared, but angry. Thus we call out to everybody in general, and to the anarchist movement in particular, for three days of solidarity actions in the UK: April 10th, 11th and 12th.

We propose to carry out actions, within your possibilities: demonstrations, publicity and/or contact the Spanish Embassy in London:

[Proposal of text: “Spain Stinks as a police state: Stop repression, Freedom of anarchists arrested in the Operacion piñata”]

Upcoming demonstrations and other events in the UK:

Please send us your actions and proposals, and the outcome of these, so we can divulge it through our network.

Liberation for the anarchists arrested now!

The Economical Crisis is hitting especially hard in Spain. The so-called “Welfare State” and the “Middle Class” are collapsing, while the political system socially based on them is being questioned. Despite this, the Spanish government keeps assuring that, unlike in Greece, there is not a critical situation, yet they apply the same financial and repressive measures in order to dispel the Greek ghosts.

In Spain people are angry. Lots of interesting struggles are taking place―struggles in which the people are addressing their problems by themselves, pointing directly to their real enemies: Capitalism and, for a few of them, also the State. We can see people organising in their workplaces beyond the mainstream unions´ framework, resisting evictions, confronting the police, squatting, opposing megalomaniac projects of the corrupt ruling class, and also self-managing projects that, albeit still bounded to local and sometimes isolated initiatives, draw lots of popular support[1].

This is not enough for shaking the grounds of power, and is certainly not leading to a drastic, comprehensive change. This is only sufficient to keep bosses and politicians in tension.

There are, of course, those who try to recover popular initiatives in order to become the political leaders of the future. Some of them will become council representatives, even majors or ministers. They talk about "democratic regeneration" or promise to go back to the “Welfare State”. They make call outs to the "reality" and urge the rest to attune themselves to this new version of “there is no alternative”, isolating what they consider to be "radical elements".

The Spanish Government is well aware of the fact that the calming siren song of the new shepherds is not enough. An army of journalists, politicians and government workers are being mobilised to make sure that nobody crosses the limits. However, their principal weapon is an old one: repression.

That is not something new, for since the end of Franco´s dictatorship, Spain has been top of the list in the EU in terms of imprisoned population, tortures or violation of basic rights.

Social tension means an increase of these repressive practices and now laws are changing to set a legal framework wherein previously unthinkable measures are rendered necessary.

The tightening of the Criminal Law Code or the recently approved Anti-Protest Law (AKS "Ley Mordaza") are just a couple of examples.

They know that any answer to this repressive wave aiming to become respectable “political opposition” will lose their strength in the medium-term. The history of the Spanish Left is a paradigmatic example of domestication and treason. What really terrorise them are not the new parties, nor the historic unions. They rather fear the unexpected insurrections and the people who promote and spread them, that is, the organisation and the affective networks emanating out of the official opposition.

In order to cut across these flows of solidarity, the ruling class is interested in creating a determinate profile for those responsible. The people behind the agitation, they say, is a particular subject: crazy, isolated, violent, irrational. This is what they refer to as “the anarchist terrorist”.

Within this context of social hysteria, on the 30th of March a new repressive hit against anarchists took place. The Police and the "Audiencia Nacional" (a former tribunal of the dictatorship now specialised in "democratically" prosecuting “terrorism”) arrested 37 comrades in Palencia, Barcelona and Madrid. This police operation has been dubbed “Operación Piñata” and it seems to be a continuation of the “Operación Pandora” that took place over 3 months ago in that they follow similar patterns.

A total of 17 raids were carried out, six of them in Occupied Social Centers [CSOs], leading to 38 detentions. During the course of the raids fourteen people were arrested for the felony of resistance, eleven for offence of squatting and another thirteen have been accused of membership in a criminal organization with terrorist objectives, and of committing felonies relating to sabotage and the placing of explosive and incendiary artefacts. We have only known that they are accused of being part of an anarchist organization called Coordinated Anarchist Groups (GAC, by its Spanish initials). What we know, however, is that a lot of material has been confiscated (computers, books, etc.).

The OP has been ordered by the Judge Eloy Velasco The strategy used for this raid has been similar to previous ones: a lot of people arrested, forcing the entry of homes or social centres, big police deployment and intimidating attitude, absolute lack of transparency in the actuation of the police and the courts and noise, a lot of noise and alarm amplified through the media. For this judge, they are not in prison because what they have done but "the danger that the organisation in which they are involved could suppose in the future". Along these lines, the general director of the National Police declared, back in June 2014, that the fight against “anarchist-terrorism”, which according to him has only recently settled in Spain, “is a priority for the Spanish police”.

However, if their intention was to intimidate and isolate what they call the anarchist-terrorists this has been a bad beginning. Just hours after the operation started, a wave of solidarity spread around the country and even far beyond it. An increasing number of people, both inside and outside Spain, mistrust the idea that the police and the media spread about anarchist ideals. Instead of being an isolated group of people, thousands of people are taking the streets in solidarity with the detained. They realise that those who are being labelled as members of a dangerous, terrorist cell, could have been them, for Spain―like many other places in Europe― is becoming a trap for those who do not want to become docile subjects.

We would like to make a call out for the solidarity with the Spanish anarchists. Spain is becoming a Police State because the Government is scared.

They are scared of the coherence in the criticism and the practices that the anarchists represent and the incidence that this is having in the people of a country with a long history of revolts. We cannot leave them alone. We need to spread the information and organise actions in solidarity beyond the boundaries of the Spanish State.

Liberation for the anarchists arrested now!

[1] Examples of this are the fights in Gamonal, Can Vies or PAH affected by the mortgage platform.

This article was published on 9 April 2015 by the SolFed group in Brighton. Other recent articles: