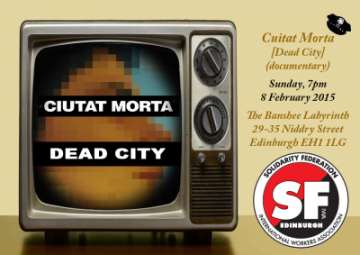 "Dead City investigates and unveils what is behind one of the worst cases of corruption and police torture that have occurred in Spain.

"In June 2013, a group of 800 people occupied an abandoned cinema in the city centre of Barcelona to screen a documentary. They renamed the old building in honour of a girl who had committed suicide two years before: Cinema Patricia Heras. Who was Patricia? Why did she take her own life and what does the city of Barcelona have to do with her death? The occupation of the cinema relates to one of the worst cases of police corruption in Barcelona, the dead city.

"The night of february 4th, 2006, there was a baton charge in the city centre of Barcelona. It was in the vicinity of an old occupied theatre in which a party was taking place. Objects fell onto the police officers from the roof of the occupied building. According to what the Mayor of Barcelona said on the radio hours later, one of the officers, who was not wearing a helmet, fell into a coma by the impact of a flowerpot.

"The arrests that followed the tragic event suggested a vengeance. Three of the arrested young people, of South American origin, were severely tortured and deprived of liberty for two years, waiting for a trial considered full of irregularities by the defence. A forensical team certified that the object that injured the police officer fell from above, whereas the detainees were at street level. Another two detainees -Patricia and Alfredo- were not even present at the scene: they were arrested at a nearby hospital and declared suspects due to the way they were dressed. The proof and evidence found to exonerate all the suspects have never been taken into account.

"Amnesty International has denounced that the acts of torture have not been investigated."

This article was published on 4 February 2015 by the SolFed group in Edinburgh. Other recent articles: