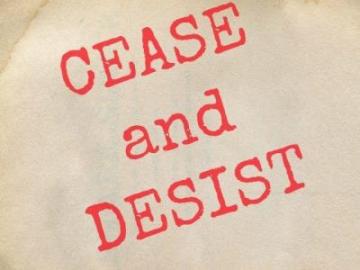 Cafe Plenty issued legal threats just hours after Brighton Solfed tried to talk to them about £4,400 they owe a former worker. Having made clear they were unwilling to resolve the matter, the cafe's bogus threats triggered a campaign of protest highlighting the plight of the former worker organising with Solfed.

A Solfed member involved in the case explained what happened: “In late November, a couple of us went to hand them a letter about the £4K they owe the former worker. Our approach is always to try to resolve things amicably, by talking to them first and give them a chance to rectify their mistake. Since the owner wasn't there, we just left the letter with a helpful member of staff.

“We didn't hear anything from the cafe, so 5 days later, two of us went back – apparently the owner wasn't there again, so we handed out information about basic workplace rights and the case to cafe workers, who were amused about this. Then a couple of hours later, the owner sent us a strongly worded but ultimately bogus cease and desist notice!”

The letter entitled “Notice to Cease & Desist Trespass, Harassment, Intimidation and an attempts to pervert the course of Justice” claimed that Brighton Solfed and the former worker were “engaged in a campaign of physical and electronic interference, harassment and intimidation against [Cafe Plenty], their employees and customers”.

As a Solfed member commented, “to be honest, it all seemed slightly over the top to me - we hadn't even managed to give him our letter! Also, I must have missed the day they made asking to get paid for your work an attempt to 'pervert the course of justice.' ”

The Cease & Desist letter claimed that “all matters relating to the [case]” were “under police investigation” and that “therefore the actions and activities of Brighton Solidarity Federation and by implication D. are alleged attempts to prevent [sic] the course justice”.

Cafe Plenty claimed they would issue a file “to the investigating officer for East Sussex Police”, citing an officer's name, a crime number, and a seperate reference number.

“We've received several spurious legal threats this year” a Solfed member said, “and adding a crime reference number was a nice touch. But actually that's how we knew the threats were phoney. A crime number is issued on any 101 call, whether you're issuing awareness of a vulnerable person, think you've found a watch in the street or are reporting something that happened 3 years ago.”

“Crime reference numbers have a specific format that usually includes the date it is issued, and neither of the two numbers they gave followed that format. Also, the police don't issue separate crime numbers and reference numbers – we think it could have been made up or reused from something else. So we realised the threats were just bluster trying to intimidate the worker.”

“Whatever happened with that crime reference number, no crime has been committed – except for the £4K wage theft by the Cafe.”

“Since they preferred bullying instead of owning up to their mistake, we knew there was no point in trying to reach out to them any further. The next day, we were outside the cafe, handing out leaflets to potential customers about how they treated their former worker.”

It is the practice of Brighton Solfed to publicise legal threats received in the course of disputes. As an anarcho-syndicalist union, Solfed is in solidarity with hospitality workers – Solfed's practice is firmly opposed to all harassment or intimidation of staff employed by businesses that Solfed is in dispute with.

Solfed members have not entered Cafe Plenty since the owner first implied Solfed were not welcome on trespass accusations. However legal threats will not make Solfed cease or desist organising in solidarity with workers who have been wronged.

Brighton Solfed started informational pickets of the cafe on 30. November, making customers aware of the dispute. The vast majority of customers and passersby have been supportive of the dispute. Two weeks later, after fruitless talks with the owner, the campaign was stepped up, naming Cafe Plenty online for the first time.

Despite Brighton Solfed's flagrant non-compliance with the cease and desist letter, at this point we are not aware the cafe have taken any further legal steps.

This article was published on 20 December 2017 by the SolFed group in Brighton. Other recent articles: