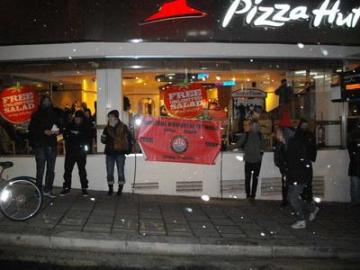 The Pizza Hut Workers Union is taking action as a direct result of managements unwillingness to compromise with us, in regards to our legitimate concerns over pay and conditions, and is part of a dispute dating back to last April.
Bank Holiday Pay
Standard practice is to pay workers time and a half for working unsociable shifts, particularly Bank Holidays. Pizza Hut's policy has been to reverse this and has now revoked it in all cases, including if a member of staff was to work Christmas Day. We raised the issue and have, at this time, seen no willingness on the part of management to compromise.
Delivery Drivers Commission
Delivery staff, using their own cars, are paid a commission rate of 60p per delivery. The rate has remained static for several years. This is despite a changing delivery radius and the rising price of petrol. A driver can deliver a pizza that could be part of a 6 mile round trip, giving them a rate of 10p per mile. A worker on minimum wage is expected to pay for the cost of running a car as well as towards the cost of fuelling it while at work. Despite a review and the promise of a new rate, the rate has remained the same. We ask for your support in our ongoing dispute and ask you to contact Pizza Hut head office to tell them to take our concerns seriously.
You can write to them at:
1 Imperial Place, Borehamwood, WD61JN, United Kingdom.

This article was published on 8 February 2012 by the SolFed group in Brighton. Other recent articles: