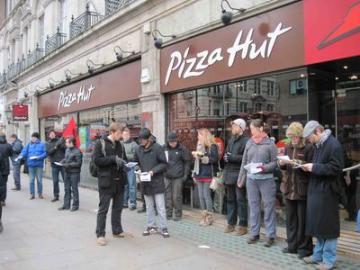 Today saw members of North and South London SolFed join a picket in solidarity with Sheffield Pizza Hut workers. Organised by the IWW and targeting the busy Pizza Hut at the Strand, twenty picketers gave out leaflets to prospective customers and members of the public. The workers in Sheffield, who've organised with the Industrial Workers of the World, have been in a year-long dispute with the company over wage rates and holiday pay.

Despite the cold weather, the picketers were in high spirits and gave out hundreds of leaflets over the course of the afternoon. The picket was part of a national day of action against the pizza chain, with shops all around the country being picketed at the same time.

London SF would like to again extend our solidarity to the Sheffield Pizza Hut workers. For far too long highly profitable and hyper-exploitative fast food companies have gotten away with low wages, bad conditions, and management by bullying. By organising themselves, the workers in Sheffield have shown the power that workers have when they stick together. Our small act of participating in a London picket is the least we can do to support their struggle and, should the call go out, we'll be back outside Pizza Huts all around the country to demand respect and fair pay for its exploited workforce.

A write-up from the London IWW which also contains background on the dispute can be found here:

This article was published on 4 February 2012 by the SolFed group in North London. Other recent articles: