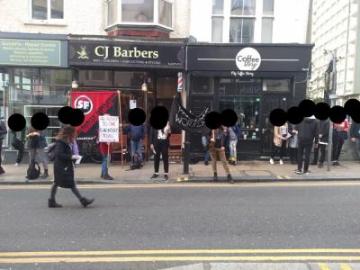 Brighton SolFed has started a public campaign against CJ Barbers, who owe one of our members over two months in unpaid wages. The worker was employed as an "apprentice" for no wages, with the promise of paid work after two months. Unfortunately, this kind of practice is common in the barbering industry in Brighton, so the worker decided to go along with it. After the two months were up, CJ Barbers paid him...£50 a week, for full time work! The worker left two weeks later.

During this so-called “apprenticeship” the worker was given no contract, no opportunity to work towards any qualification, and worked full time hours. This therefore does not meet the legal requirement of an  apprenticeship, which is why we are demanding that CJ Barbers pays our member the full legal minimum wage, holiday pay, and pension contributions for the hours he worked, which total £2821.63.

The worker explains: “CJ Barbers promised me an education and a fully paid position after two months of free labour. This was a lie on both fronts so I quit when I discovered they had no intention of ever paying me properly. They were exploiting my labour and lying about my ability as a barber to prevent me seeking other employment.

“Because they did not keep keep up their end of the deal I am now demanding they pay the minimum of what my workers rights entitle me to.”

SolFed tried to resolve the dispute amicably, offering them the opportunity to resolve the matter before we made it public. However, we received no response to our overtures. Therefore, on Sunday 7th April, we opened a public dispute by picketing CJ Barbers. The management were immediately hostile, with both owners yelling at SolFed members, and one pushing picketers around. However, his attempts to disrupt the picket by pretending to be cleaning his windows only served to provide entertainment for passers-by! The owner also made a number of baseless accusations about the character of his ex-worker.

The owners have also made several legal threats against both the worker and SolFed, and contacted the police multiple times in an attempt to scare us away. However, it’s clear that they’ve realised that this kind of intimidation doesn’t work, and have instead now taken to the internet with their friends to refer to us as a “gang”.

Unpaid trials are a huge problem in our city, and Brighton SolFed has had success in the past  of organising with workers to ensure that no work is without pay.

Our dispute with CJ Barbers will be ongoing until this worker receives the pay they are owed.

This article was published on 2 May 2019 by the SolFed group in Brighton. Other recent articles: