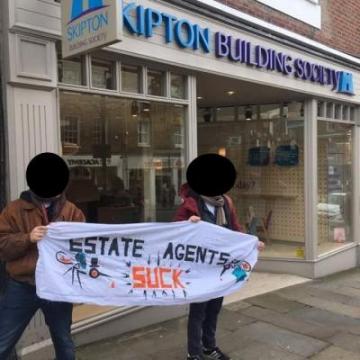 It’s been a good week in our dispute with Fox & Sons. On Wednesday we picketed the business of a landlord who rents a property out through Fox & Sons; by Thursday she had dropped them as her letting agent. We’d written to this landlord one week previously, explaining Fox & Sons’ systematic mistreatment of their tenants, and demanded that she either drop them as her agency or speak to them and tell them to pay compensation to the tenants involved in our ongoing dispute with them. This landlord chose to do neither, so we staged a picket outside her business on Wednesday 6th February, informing passers by about her association with Fox & Sons.

The picket was a lively one, with one passer by joining us in solidarity, and the business owner and landlord in question responding by calling the police and then behaving aggressively toward the picket when the police didn’t move it on. Eventually out of options, she closed the shop half an hour early and left. The next day, she emailed us to inform us that she had dropped Fox & Sons as her agency. A quick call to the agency confirmed that her property was no longer available to let through them as the landlord had withdrawn it from the market. Direct action gets results!

In spite of this loss of business, Fox & Sons are still yet to offer the £2280 compensation we are demanding for the six tenants they made homeless. Because of this, we have escalated our campaign to include Jade Software, a company based in Australia that is also owned by Skipton, owners of Fox & Sons. The Anarcho-Syndicalist Federation (ASF) - the Australian section of the International Workers Association (IWA), the federation that SolFed is part of - wrote to Jade Software earlier this week, informing them that they would be commencing a public campaign against them in solidarity with our own. This campaign began yesterday, Saturday 9th February, with pickets of the Melbourne branches of Jade Software. Like ours, the ASF’s campaign will be ongoing until these tenants receive compensation. Yesterday, we also had pickets of Fox & Sons’ associate agencies, as well as of branches of Skipton, in Manchester, Liverpool, and Guildford - our solidarity is as global as their capital!

This article was published on 10 February 2019 by the SolFed group in Brighton. Other recent articles: