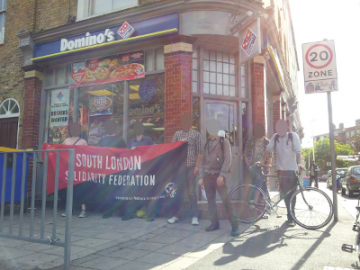 On 15th September SLSF took part in the international day of action in support of Domino’s delivery drivers in Australia.

The drivers have had their pay cut 19% overnight. As their trade union was complicit in the cut, the drivers have formed a new union, the General Transport Workers Association (GTWA), to fight the pay cut.

The GTWA is affiliated with the Anarcho-Syndicalist Federation (ASF), an Australian 'friend' of the Solidarity Federation's international, the International Workers' Association (IWA).

SLSF went to the Domino’s in New Cross and handed a demand letter to the manager, telling him why we were there and how we would be back.

We leafleted customers and passers-by and spoke to the drivers outside. Some were wary at first, thinking we wanted them to strike, whilst others were immediately enthusiastic and supportive of the demands.

This was just one picket of many across the world which will send a collective message to Domino’s.

This article was published on 18 September 2012 by the SolFed group in South London. Other recent articles: