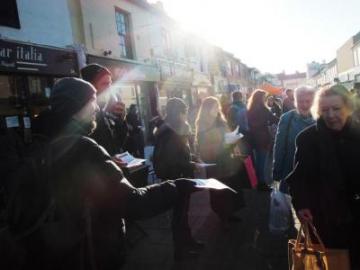 On Saturday, the 13th of December, the first picket against Caffe Bar Italia took place. Around 11 in the morning, a group of 10 SolFed members met in George Street (Hove) and after trying unsuccessfully to reach an agreement with the owner, started the picket outside the business.

This conflict started a few weeks ago when a worker contacted SolFed's Brighton Hospitality Workers because she had not been paid the amount of £1,264. Apart from the holiday pay that she was owed, her contract stipulated a minimum number of hours which were not offered to her. A demand letter was sent with the boss requested to respond. The boss refused to pay and insisted that he didn't have to pay her for “the hours she didn't work”; nevertheless, the law says that a worker should work at least the minimum hours his contract says.

The picket on Saturday lasted around one hour in a busy morning, in which hundreds of leaflets providing information about the conflict and calling for the boycott of the business were given to people in the street. There were some episodes of confrontation: in the first place, the owner called the police immediately (without, by the way, any consequence) and, also, a woman in the market in front of the café supported him and confronted the activists saying that those kind of actions were “bad for the business” and that “people [weren't] happy with that”. On the other hand, a bunch of passers-by showed their support to the action.

Apart from calling the police, the owner of Caffe Bar Italia insisted on not contacting SolFed members (other than via email) and put a public sign in the door of the café in which he encouraged the former worker to abandon direct action and added that “Brighton Solidarity Federation (a revolutionary union initiative) lacks of impartiality and uses psychological harassment to try settle down payments without evaluating both sides”.

After one hour, without any further incident and when the leaflets run out, the stall was settled at the beginning of George Street to give information and the new newsletter to the passers-by.

This article was published on 17 December 2014 by the SolFed group in Brighton. Other recent articles: