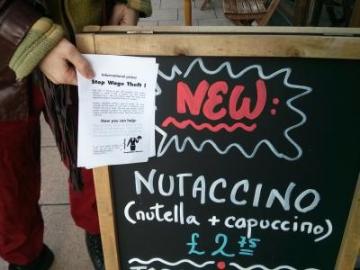 In recent weeks, we have continued our public campaign against Caffe Bar Italia for unpaid holiday and unpaid contracted hours for a total of £1.264 to Yolanda, a former worker.

In February, Brighton SolFed decided to temporarily suspend the actions because what seemed an attempt by the management to solve the conflict and pay what the worker is owed. However, the company offered only a fraction of the amount owed, fully taking advantage of Yolanda's precarious situation.

Instead of paying what he owes the worker, the boss of Cafe Bar Italia, is hiding behind stupid formalisms to continue to hold on to money that does not belong to him. Caffe Bar Italia refuses to meet with Brighton SolFed and urges the worker to go to ACAS. This is of course a way to prolong the conflict, to delay even more the debt payment and, what is most interesting for the company, to channel the dispute into a bureaucratic route thereby removing it from public view.

Precisely one of the most interesting parts of this campaign is the public condemnation of a situation unfortunately too common in the hospitality sector. This conflict against Caffe Bar Italia is but one example of the daily reality throughout the hospitality industry in Brighton and Hove. Brighton SolFed is it to publicise our campaign and to demonstrate that workers' solidarity is the most effective way to confront the attacks of the bosses.

Fortunately, the campaign is getting more and more strong in Hove. Caffe Bar Italia is increasingly vulnerable to the campaign launched by Brighton SolFed boycott and the local Caffe is mostly frequented by a circle of personal friends of the owner during the pickets.

Obviously SolFed remains open to find a mutually satisfactory solution to the conflict. However, this will only become possible once the management ceases its attitude of stubbornness – and stops stealing wages from its staff.

This article was published on 30 March 2015 by the SolFed group in Brighton. Other recent articles: