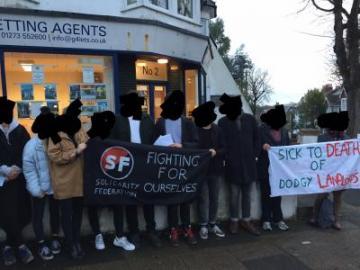 Brighton Solidarity Federation has concluded its campaign against the student lettings agency G4Lets. The campaign was in support of two groups of tenants who had just over £3000 deducted from their deposits. One group of tenants had £2000 taken from their deposit for fire safety, redecoration, and pest control, in spite of an Environmental Health Report from the council informing G4Lets that these issues were their responsibility to resolve as part of landlords' general obligations to the properties they let out. Another group of tenants had £1080 taken from their deposit for cleaning and redecoration, in spite of the fact that they cleaned the property before leaving it, and had it professionally repainted, which they had an invoice for as evidence.

The tenants approached SolFed in October last year and explained their grievance. They highlighted that over the course of their tenancies, G4Lets showed an impressive capacity for incompetency, deception and manipulation. Early on in their tenancy, one group of tenants were copied into an email that admitted that the carpet in their house was 'beyond cleaning' even before they moved in. G4Lets then proceeded to charge these tenants for the cleaning of the carpet at the end of their tenancy, even though it was going to be replaced. They also sent builders into the property during the exam period and without consulting the tenants. In the same tenancy, one part of the flooring in the property had been so neglected that it was wasting away and collapsing. This is only a small sample of the ways in which they were mistreating these tenants.

Along with the tenants, we wrote to G4Lets in early November, outlining the issues and demanding the return of the deposits, as well as compensation for the stress and time involved in dealing with these dodgy deductions, and for poor service in general.

The campaign began with a picket of the agency a week after delivery of the demand letter, after G4Lets insisted that they would not be engaging with the demands and that the tenants should pursue redress via the Deposit Protection Scheme (DPS). We told the tenants that they were free to do this if they wanted, and explained why Brighton SolFed doesn't pursue issues such as deposit theft in this way. Landlords and agencies have three different protection schemes to choose from, so it would not be in their interests to consistently rule in favour of tenants. Moreover, agencies have staff dedicated to undertaking such administration, who have knowledge and experience of the regulations, meaning that the deck is stacked in their favour even when the agency is so blatantly in the wrong, as in this case. We also think that direct action public campaigns help to highlight that many of us share these problems, and that our power lies in banding together to fight them. DPS procedures keep these problems private and help agencies to guard against the formation of solidarity and support amongst their tenants. Finally, not all tenants have the evidence required to challenge a deposit deduction, but the landlord/tenant relationship - one person forcing another to pay them in order to have somewhere to live - is fundamentally exploitative, suggesting that someone only has the right to a home if they have the capacity to line someone else's pockets. We think this is wrong, so when even more money is taken from tenants via deposit deductions, our solidarity is with tenants whether or not they have the types of 'evidence' required by a DPS to prove their illegitimacy.

The tenants decided to continue with the public campaign. G4Lets - who rent exclusively to students and who only deal with rentals, not sales - is tucked away in a residential area near Fiveways. Clearly they know, as a business that systematically exploits and rips off students, that it's best for them to keep a low profile. As well as pickets, we thus also published articles about the dispute - highlighting that G4Lets were protecting the profits of multimillionaire landlords - and the campaign also received wider media attention. As things went on, we also began to receive contact from other tenants being mistreated by G4Lets. We heard stories of tenants with dangerous disrepair in poorly maintained houses who feared reporting it in case they were charged for the repairs, of tenants who had already been told that deductions were going to be made from their deposits at the end of their tenancies for repair works that were not the consequence of any wrongdoing by them, of tenants threatened with eviction during the exam period, and of tenants who were pressured into paying agency fees and holding deposits on properties that G4Lets seriously misrepresented to them when showing them round.

In late December, it seemed as though G4Lets were spooked by the strength of feeling against them. They offered to refund £400 to the tenants, acknowledging, for example, that they had charged for the cleaning of a carpet that had been replaced - a spurious charge representative of just how dodgy their wider overall practices are. £400 was well short of the £3000 plus compensation that the tenants were rightfully owed, so they decided to continue with the campaign. A pledge of staff at the Higher Education institutions in the city was set up, which said that they would be advising their students to avoid G4Lets until the issue was resolved. G4Lets' displeasure at this was clear at further pickets that happened, given that their business model depends on stealing from students, but they didn't make an improved offer.

The main purpose of taking direct action in this situation was to get the tenants their money back and some compensation. In this case, this sadly has not happened. Whilst it seems clear that the campaign has cost G4Lets some business, it would appear that what they are really worried about is that paying out under the pressure of direct action could lead to a snowball effect. Undoubtedly, there are hundreds if not thousands of tenants who have been systematically ripped off by G4Lets - paying back that stolen money would likely send their business under. It seems as though they calculated that losing some business was less of a risk than paying out, which might have seen them lose all of their business. The dispute is not completely over for these tenants, who accrued a considerable amount of evidence of G4Lets’ wrongdoing over the course of the campaign, including the Environmental Health Report, which laid the blame for these pre-existing issues at the property firmly at the door of G4Lets. The report is unequivocal when it states: ‘I am writing to remind you that as an owner/manager of a shared house the above Management Regulations place a duty on you to, among other things, maintain the property in good order. During my inspection I noted fire precaution issues, a mouse infestation, poor decoration and disrepair. This represents an offence under the regulations'. Subsequently, the tenants are now pursuing their grievance via the Property Ombudsman.

The other purpose of this direct action public campaign was to draw attention to how systemic such mistreatment is, and to help, in whatever way useful, tenants to find one another and to fight back. In this sense, insofar as the campaign has allowed G4Lets tenants to connect with one another, we think it has made some gains. We would like to build on this, and so we will be staging a know your rights workshop for tenants at 2pm on Sunday 22nd April at Phoenix Community Centre, covering issues such as deposit theft, damp and mould, and disrepair. We don't claim to be experts on any of this or to have a monopoly on it, but we do have some battle-won knowledge of how to stop some of the most dubious tactics that agencies use. We thought it could be useful to share this knowledge, as well as to have a general discussion about ways that we as tenants can deal with the scams and swindles of agencies.

One thing that the campaign has highlighted is the extent to which agencies like G4Lets rely on exploiting students who may not be aware of all of their rights as a tenant. G4Lets were (just about) able to survive a direct action public campaign. But how will dodgy agencies cope with tenants that are keenly aware of their rights?  We don't think they will be able to cope with tenants working together to spot and put a stop to their tricks and dodgy tactics. Any tenants who would like to come along to the workshop are warmly welcome to.

Whilst we have concluded this particular campaign against G4Lets, we have not concluded our efforts to help bring about a world where letting agencies have been abolished - starting with dodgy practices by agencies like G4Lets.

This article was published on 29 March 2018 by the SolFed group in Brighton. Other recent articles: