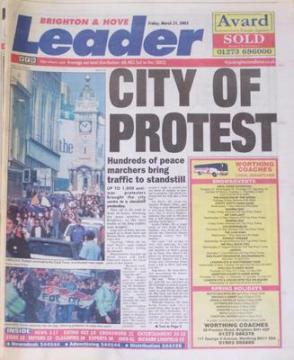 As the scale of the budget cut-backs begins to sink in, there are signs of a nascent movement against the cuts, with hundreds attending public meetings across the country, including a packed-out meeting in Brighton for the local launch of the Stop the Cuts Coalition. The last time this many people were mobilised, over a million marched through London with the Stop the War Coalition against the Iraq war. But Blair called our bluff and the war went ahead. What can we learn from these experiences for the fight against cuts?

After the massive demonstrations in London, many in Brighton felt that sheer numbers alone weren’t enough. Instead, the anti-war movement in Brighton took a different path, based on mass direct action.

The usual large demonstrations were organised, but instead of predictable A-B strolls these became mass acts of civil disobedience. Roads were taken over and blocked all over town, hundreds of school kids walked out of school to lead the demonstrations and the town hall was stormed and briefly occupied. While some of these actions remained as symbolic and spectacular as big A-B marches, peoples’ strong feelings of anger changed a usually passive form of protest into something with the potential to be more.

This sense of possibility not only shaped the actions but also the participants. For a while, it really seemed possible to actually stop the war through civil disobedience and mass direct action. Alas, it was not to be. Which brings us to the anti-cuts movement.

The current cuts are a direct attack on our livelihoods in a way not seen since Thatcher. This raises the possibility of industrial direct action – strikes, occupations, work-to-rules, sabotage – as well as street-based civil disobedience. This starts to sound like something which really could force the government to back down as the ‘necessity’ for the cuts is revealed as plain old-fashioned class war.

What we need is direct action organized from below. With sufficient rank-and-file anger, the TUC may be pushed into calling only the second general strike in British history. However, it’s us, not the union bosses who can stop cuts.

Most importantly, we need to recognise that stopping the cuts is more than just a numbers game. The biggest imaginable march past parliament won’t reverse policy. Mass direct action, especially industrial action, just might. On campus, we need student action in supporting staff as they face the inevitable next round of cuts in education. We need students organising in our own workplaces.

And if we want to see that happen we can’t put our faith in anything other than our solidarity and ability to organise.  We must take a lead in organising ourselves rather than waiting on the TUC or anyone else to do it for us.

This article was published on 6 October 2010 by the SolFed group in Brighton. Other recent articles: