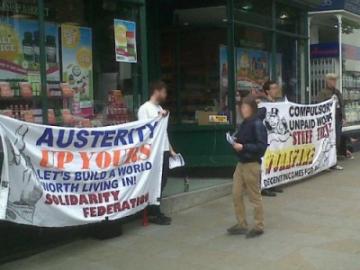 On arrival at the Blackheath branch of Holland & Barrett, one of the larger stores in London, banners were unfurled and a noisy but good-natured picket began.  Staff in the store were given a well deserved break whilst for two hours barely anyone entered the store after being informed of the companies exploitative practices.   Despite the somewhat posh environment, the picket was well received by those passing by, many of whom were shocked to discover that a pretend ethical company like Holland & Barrett refuse to pay many of their workers.

After the successful picket it was back to Lewisham shopping mall where Holland & Barrett were now unguarded.  Protesters entered the shop for some militant browsing before unveiling the banner and shouts of ‘workfare, unfair’ brought the store to a standstill.  They were soon joined by a very cross store manager who began shouting ‘get out, get out’ at the top of his voice, upsetting some of the store’s younger customers.

The shopping centre’s security weren’t far behind as they arrived en masse and began throwing their considerable weight around.  Finally plod turned up, and along with the security staff, bundled protesters out of the store under threat of imminent arrest.

A mob of police and security then pushed protesters out of the shopping centre completely.  The picket continued for a short while in the market before a quick trip to Greggs, who are also involved in workfare schemes.

Once again customers turned away after they were told of unpaid labour being used in the company’s stores.  Greggs, who are already reeling from the news that coppers are to face annual fitness tests, as well as the infamous pasty tax, could well do without yet more controversy sure to drive away customers.

The Government have temporarily removed sanctions from some of the workfare schemes after the recent storm of protests.  Early indications suggest this hasn’t filtered down to Jobcentre staff with reports that people are still being bullied into unpaid work.  Those who refuse the currently ‘voluntary’ Work Programme and Work Experience schemes have been forced to attend Mandatory Workfare instead.

Meanwhile multi-national companies are using work experience staff to fill labour shortages and drive down wages and working conditions for everybody.  In a naked wealth grab by the rich, multi-billion pound companies and their Tory lackies are attempting to dictate to unemployed young people that it is normal and acceptable to carry out unpaid work in a High Street Store or supermarket whilst trying to find a job.  Barely any of these claimants are offered jobs at the end of the scheme and results suggest that ‘Work Experience’ is virtually useless as a method of helping unemployed people find work.

Protests are set to continue across the UK until every worker is paid the wage they deserve.  Next weekend a conference is being held in Brighton to discuss ‘how do we break workfare?’.

Keep an eye on the Boycott Workfare and Solidarity Federation websites for details of upcoming action against workfare.  In the meantime boycott Holland & Barrett and support your local independent witch doctor instead.

This article was published on 26 May 2012 by the SolFed group in South London. Other recent articles: