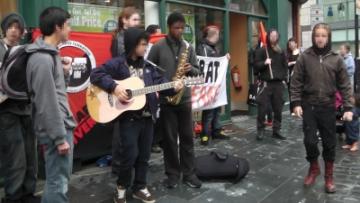 The first target was Holland and Barrett, which Solidarity Federation continue to target on a national scale due to its claim to be an "ethical" store. Here, we had lots of interest from passers by, with plenty coming over just to take a leaflet off us as well as a number of unemployed people expressing their support for the campaign and chatting about their own experiences with the various workfare schemes. We are pleased to say that a number of people refused to cross our picket, and that many who did came out shortly after with no purchases and our leaflets still in hand.

After a while, it was decided to move on to Argos. We marched through the main shopping area in the city centre, banners and flags aloft, the musicians continuing to play as we marched.

At Argos, there was an occupation as well as a picket, effectively disrupting trade and seeing a number of customers leave after taking leaflets. Again, there was a lot of support, as well as a chance to have a brief conversation with at least one member of staff about the effect workfare would have on their job. There was one brief altercation with the owner of the store next door, who complained that he would look guilty by association, and threatened to rip down our banner. However, again there was broad support and several additional people joined the action.

Marching through the streets once more, our final target was Tesco. Tesco has been a particularly misleading participant in the scheme, claiming to have withdrawn whilst in reality carrying on using the forced labour of claimants.

Here, again, we had both a picket and an occupation. We effectively managed to shut the store down for most of that time, with very few people venturing in and several happy to take our advice and use Sainsbury's around the corner as it has withdrawn from the scheme. We continued with the picket, and the lively song set, until we wrapped up the action for the day.

Overall, this was one of our most succesful anti-workfare actions yet. However, it doesn't end here - at our last meeting, Liverpool SF agreed on a series of pickets and other actions leading right up to the national week of action on 7-14 July, as called by the national conference in Brighton.

This coming week, alone, we are calling for two separate communications blockades of A4e - one for the Liverpool office, one for the Bootle office - and workfare pickets in the Wavertree area. If you support the campaign against workfare, we urge you to get involved in these actions in any way you can. Only by keeping up the pressure and using sustained direct action, can we shut down those who exploit us and end workfare.

This article was published on 10 June 2012 by the SolFed group in Liverpool. Other recent articles: